Rye Crew Are US Nation Champs 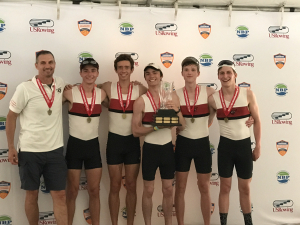 Dateline Sarasota, FL, June 9th-11th, 2017. The 2017 USRowing Youth Nationals, the premier youth rowing event in the USA, was held at the Nathan Benderson Park in Sarasota, FL this past weekend. 1,700 athletes from 150 clubs in 32 states, competed in 18 boat classes. Racing started with time trial heats, and progressed to semi-finals and finals. 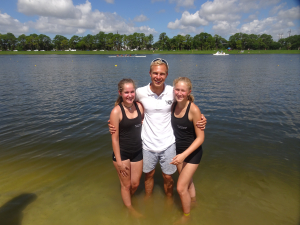 The other boat that qualified at the NYS Championship comprised freshmen, Clara Sutherland and Jillian Breen, in the women’s lightweight 2x category. An outstanding accomplishment for freshmen to qualify for Nationals. They competed well in 3 races in a pool of 23 boats that was eventually won by Y Quad Cities of Illinois. The experience gained at such an early age augurs well for them in the years ahead.

On Friday morning, the men’s boat, won their time trials by 5 seconds against 20 of the best from California to Florida, Cincinnati to Connecticut. Continuing the trend on Friday afternoon on the 2,000meter course, they won their semi-finals by 7+ seconds, with Long Beach, California coming in second. The top three from each semi-final qualified for the finals. 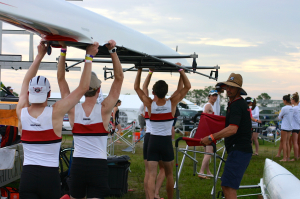 (PHOTO: The boys setting off to the launch area.)

In the finals on Sunday morning, start times being changed to adjust for inclement weather on Saturday and impending storms on Sunday, the men’s boat did Rye proud. Nerves in the other boats were jittery at the starting line of the championship race, as the crew from Long Beach, CA, jumped the start causing the teams to come back in line and eliciting a warning; on the second start, the team from St. Andrews had a malfunction and the coxswain stopped the race, meanwhile Rye had already sprinted to the 250 meter mark. 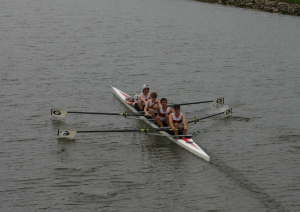 (PHOTO: After the victory.)

Frustrating as it must have been, the six boats came back to the starting post and set up for a third start. From beginning to end, the Rye boat led the way, trailed by Newport, CA, and St. Louis, MO. All the early mornings, teamwork, trust, athleticism and hard work was paying off. In a convincing victory where Rye rowed in a beautiful display of co-ordination and prowess on the water, the commentator lauded “These gentlemen from Rye High School are really letting the boat move, pushing it through the water and letting it glide out”.

The boat crossed the finishing line in 6:39.978 to become US National Champions. A well deserved victory for the boys in the Rye boat! Equally, a nice feather in his cap for their tireless coach Stan Nelson, who is celebrating Ten year’s as the coach of Rye High School Crew.