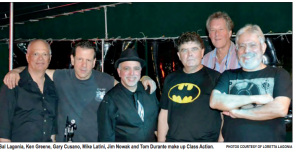 What: Thursday Concerts at Rye Town Park
Where: lawn at northeast end of the park (by the snack bar)
When: First Concert Thursday, June 29, 6:30 to 9 pm.
How Much: Free; regular parking rates apply

The “Ocean Grille” restaurant at Rye Town Park is presenting a series of lawn concerts at the north end of the park — on the hill facing Long Island Sound.

The Thursday evening concerts will feature performances by regional bands from the tri-state area.

The first concert will be on Thursday, June 29, featuring the music of “The Class Action Band” from Yorktown. The concert will start at 6:30 and run to 9 pm. Additional concert dates and performers will be presented when they are arranged.

The band performs covers of ‘70s and ‘80s musicians such as Chicago, Huey Lewis and the News, the Eagles and more.

“We try to play things that every other band doesn’t play, so we have songs in our set list that are different,” says co-founder Gary Cusano, “It’s songs you know, but songs that are uncommon for a rock and roll cover band.” For example, the band performs “Miami 2017,” a lesser-known (though tremendous) song from Billy Joel. The song is certainly not exclusive to Class Action’s set list, but the band puts a twist on it that many bands certainly don’t.

Admission is free, and food and beverages will be on sale at the snack bar by the north beach entrance. Restrooms are located there as well.

Regular parking rates will apply. People living near the park are encouraged to walk. People must provide their own seating, either lawn chairs or blankets. Flashlights and insect repellant are also recommended.

The concert location can be reached by walking north on the beach path from “Ocean Grille.”

In case of rain, the concert will be cancelled. The call as to whether a concert is cancelled will be made by 3 pm the day of the concert.