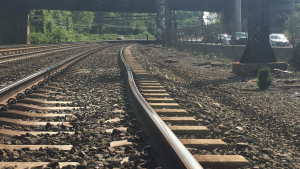 The Metro North derailment in Rye back in May was likely caused by a "kinky rail" – a warped rail caused by high temperature. The condition was noted by inspectors earlier in the day before the May 18th accident. Trains were advised to reduce speed, but the track continued to be used until the derailment just before 5pm.

According the the preliminary NTSB report:

The report is preliminary and can be viewed below.

U.S. Senator Richard Blumenthal (D-Conn.) blasted Metro North in a letter, saying: "Despite the railroad’s knowledge of the heat kink and the imposition of tougher speed limits, the train flew down the tracks anyway. Clearly, effective operational management broke down. Moreover, Positive Train Control technology – which prevents human error from allowing trains to speed – was absent on the track. That allowed the train to speed unchecked, which caused a near-calamity to occur."

The information in this report is preliminary and will be supplemented or corrected during the course of the investigation.

On May 18, 2017, about 4:56 p.m., eastern daylight time, westbound Metro-North Railroad commuter train 1373 derailed at milepost 24.55 on main track 3 of the Metro-North Railroad’s New Haven Line in Rye, New York. Train 1373 originated from Stamford, Connecticut and was destined for Grand Central Terminal in Manhattan, New York when 5 of the 12 cars in the consist derailed. Of the 185 passengers on the train, 14 reported minor injuries. Two crewmembers (train engineer and conductor) also reported minor injuries.

On May 17-18, 2017, the temperature was above normal. At the time of the accident, the wind was from the west at 12 knots, visibility was unrestricted at 10 statute miles, partly cloudy sky and temperature of 93°F.

The engineer and conductor of train 1373 went on duty at 6:15 a.m. and made a round trip to Grand Central Terminal during the morning rush hour. After their interim release, the train crew met at 4:15 p.m. and received the train equipment at Stamford Yard. Train 1373 consisted of 12 electrically-powered multiple-unit passenger cars that included a controlling cab car.

Approximately 85 trains per day normally operate over main track 3. However, main track 1 was out of service so approximately 104 trains per day had been operating on track 3 at the time of the accident. Normally, the maximum authorized train speed throughout this segment of track was 60 mph for passenger trains; however, at the time of the derailment, a temporary speed restriction of 10 mph was in effect.

The track supervisor said that he thought the track was misaligned about 2-inches, but he did not measure the deviation. He watched about four trains pass over the area, and said the deviation did not change. At 4:30 p.m., as he was preparing to leave the area, the track supervisor said Metro North train 1371 passed through faster than the 10-mph speed restriction. The track supervisor reported the incident to the rail traffic controller and inspected the track. He said the alignment did not worsen and departed the area. About one-half hour later, the rail traffic controller called and told him that the area had worsened. Shortly thereafter, he was notified that train 1373 derailed.