MyRye.com was mystified when notice of a special city council meeting was issued with three hours notice this past Monday:

"There will be a Special Meeting of the City Council at 8:30 PM on July 17, 2017 at City Hall. City Council to consider a resolution designating an out-of-state marriage officer. Thank you" 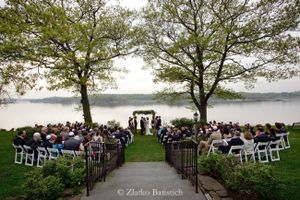 (PHOTO: Wainwright House, a popular spot to get hitched in Rye.)

A shotgun wedding? Or a nefarious city council plot?

We contacted City Clerk Eleanor Militana, who resolved the mystery:

"The City Council meeting was to designate another public official (from Massachusetts) to be able to solemnize a marriage in the City of Rye. Under the Domestic Relations Law, the City Council can designate marriage officers (other than those designated by law such as the Mayor and City Clerk). This can be done by resolution of the City Council. A bride getting married in Rye had a family friend they'd like to perform their ceremony. Given the proposed wedding date and vacation schedules of Council members, last night was the best time to meet and pass the resolution. "

No word on the names of bride and groom. And you are not invited…

Facebook
Twitter
Email
Previous articleSack Bags Otis: “He Thinks He Knows Better Than Us”
Next articleBaseball Player and Rye Native Colin Moran on DL After Foul Ball to Face