This Thursday, August 24 at 12:30pm, celebrate over a century of musical excellence with the Whiffenpoofs at the Rye Free Reading Room. 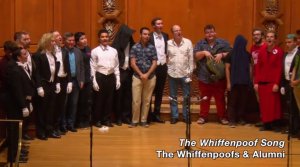 Every year, 14 senior Yale students are selected to be in the Whiffenpoofs, the world's oldest and best-known collegiate a cappella group. Founded in 1909, the "Whiffs" began as a senior quartet that met for weekly concerts at Mory's Temple Bar, the famous Yale tavern. Today, the group has become one of Yale's most celebrated traditions, with over a century of musical excellence.

Singing a mixture of old Yale tunes, jazz standards, and other hits from across the decades, the Yale Whiffenpoofs perform more than 200 concerts each year. Their characteristic white tie and tails, paired with their enthusiasm and good humor, have become iconic for audiences all around the United States and across the world. The Whiffenpoofs are perfect entertainment for diverse occasions, including public concerts, fundraising events, and private events of all types.

Recent Whiffenpoof performance venues have included Carnegie Hall, the Kennedy Center, the White House, Lincoln Center and now the Rye Free Reading Room. The Whiffenpoofs have reached a television audience of more than 175 million in appearances in The West Wing, The Sing Off, Glee, Gilmore Girls, Rye TV and other shows.

Nonetheless, the Whiffs always feel most at home at Yale on their perennial Monday night engagement at Mory's, where they close each night with the historic Whiffenpoof Song:

To the tables down at Mory's, to the place where Louis dwells
to the dear old Temple Bar we love so well
sing the Whiffenpoofs assembled, with their glasses raised on high
and the magic of their singing casts its spell…

Monday, 10am: A Celebration of Our Nation’s 246th Birthday

Leaders of Tomorrow and the Rye Free Reading Room present a celebration of Our Nation's 246th Birthday. There will be readings from selected speeches and from...
Read more
Community Groups

Deborah Goodrich Royce, author of the thriller, Ruby Falls, the story of a fragile young actress haunted by a childhood trauma, will be at...
Read more
Community Groups