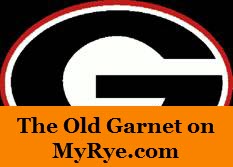 The worm has really turned in this fierce rivalry with the HARRISON HUSKIES. Since the ’03 doubleheader the Garnets have prevailed in 14 of the last 15 battles pulling Rye dead-even, even-Stephen, exactly even at 42-42-3 (.500).

Harrison dominated the series in the ‘70s and ‘90s stashing a cushion of rivalry victories. It took Rye forty-two (42) years to pull back even. For ‘17 the Garnets are a pre-season Class A 3rd ranked squad, while the Maroon and White start the campaign in the middle of the Class A pack at about #7, unusually middling for the once-proud Husky gridmen.

Returning to its more rightful and traditional place on the schedule, “THE GAME” is the highlight Section One Rivalry contest extending back some three generations over eight decades and reaches its 88th renewal as Westchester’s Premier Football Rivalry Game. Hey boys, it’s time to strap on the old leather helmet, cinch up the chinstrap and suck it up – you are representing generations of your communities in this one. “THE GAME” is for all the marbles, all the bragging rights. It’s the BIG ONE, unmatched in Westchester gridiron lore.

Kick-off is thankfully slated for 1:00PM at McGuillicuddy on a Sunday due to seasonal religious observances. If you want prime seats arrive early, long before the clock starts on Westchester’s finest high school football game. HANG THE HUSKIES ! ! !