Dem Head: Sack Did Not Tell The Truth

MyRye.com
October 2, 2017
0
970
Facebook
Twitter
Email
Meg Cameron, the Chair of the Rye City Democratic Committee has told MyRye.com that Rye Mayor Joe Sack did not tell the truth to the Westchester County Fair Campaign Practices Committee. Her statement is below. 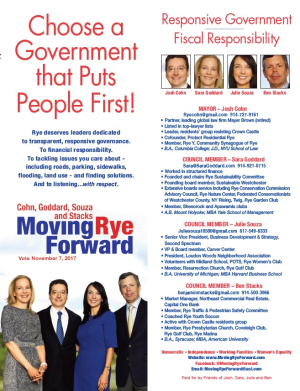 (PHOTO: The Fairness group found no issue with this palm card.)

“We respectfully disagree with the committee’s opinions.

Mr. Sack and Mr. McCartney did not tell the truth to the committee when they claimed they had no plan to move DPW to the Thruway property. At the most recent City Council meeting, a resident asked Mr. Sack if he would commit to not making that very move, and he refused. Fortunately, Rye residents are very familiar with the statements, documents and actions of these two incumbents over the past four months1 and will hold them accountable for their financially irresponsible efforts. 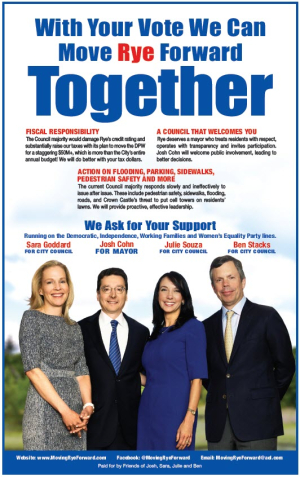 (PHOTO: The Fairness group found this ad by the Democratic slate “Unfair”)

Just as Mr. Sack regularly rearranges the City Council agenda to avoid resident comment critical of his positions, he is now trying to block the use of the words and terms commonly used in discussion of City issues, including this failed effort to say candidates should not use the words “cell towers” to discuss the Crown Castle issue.

Mr. Sack’s attempts to limit public discussion and stifle the free exchange of information and ideas will not succeed.”