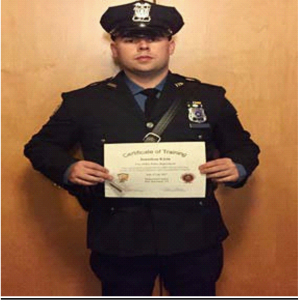 The City of Rye Police Department recently announced the graduation of Police Officer Jonathan Klein from the highly coveted Drug Recognition Expert (DRE) training program. Rye PD has made recent drug arrests including Rye resident Anthony Forgione in May of this year and Rye resident Brian Levinson in September 2016.

Klein graduated with 21 other law enforcement officers from across New York State. All completed extensive training and are now nationally certified as Drug Recognition Experts (DREs). A graduation ceremony honoring all 22 graduates took place on September 13th in Oneida County.

Drug Recognition Expert (DRE) police officers have been trained to observe the signs of drug and or alcohol impairment. DRE officers participate in training that has been approved by the National Highway Traffic Safety Administration (NHTSA) and the International Association of Chiefs of Police (IACP). After successfully completing the training, all DRE officers are certified for two years and are expected to meet certain requirements to be considered for re- certification at the end of this period. A DRE is skilled in detecting and identifying persons under the influence of drugs and in identifying the category or categories of drugs causing the impairment.

As part of their intensive training, DRE graduates must successfully complete a three-part phased program prior to being certified. The first phase consists of a two-day curriculum followed by a certification test to advance to the next phase of the program. The second phase, which encompasses 72 classroom hours and results in a final knowledge exam. The third phase, a comprehensive certification training program, requires participants to observe and identify three out of the seven drug categories and take a four to five- hour final knowledge exam to successfully comply with DRE regulations.

Commissioner Michael C. Corcoran, Jr, commended Officer Klein by stating, “Jon is a very bright, active and dedicated police officer. He completed this rigorous program and is now one of only eight officers throughout Westchester and one of 262 throughout the entire state of New York to receive the highly specialized designation of Drug Recognition Expert (DRE). This designation is testament of his unwavering professionalism and is a tremendous accomplishment considering there are over 66,000 law enforcement officers throughout the entire state.

We are extremely proud of Jon on becoming the first ever DRE in the history of the City of Rye Police Department. His certification will benefit not only Rye but our law enforcement partners throughout the region, and go a long way towards keeping all of us safe.”