When the bottom falls mysteriously out of your 2nd largest municipal revenue category, resident tax increases are the only way to make it up. 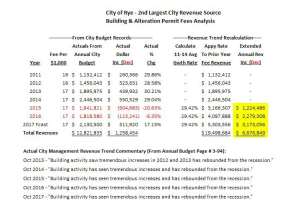 Up to $6.6M in possible missing fee receipts tells me somebody’s lying. Either it’s city management or members of the collective building and construction industry or perhaps its city resident taxpayers own ‘lyin eyes.’ Because we all know there is almost no street in the City of Rye you can drive down without passing an active construction project – a renovation, a remodeling or a full tear-down on the way to a brand new structure. This rolling building explosion has been a constant for years now and we all know how much it costs to complete even the smallest residential project in tony Rye, NY.

But if you can’t trust your own ‘lyin eyes’ word for it, you can assuredly take the word of Rye city hall. After all, city hall sees all the builder/developer paperwork, issues the permits, sits as judge & jury over requests for property law variances, inspects the ongoing construction progress, issues final Certificates of Occupancy, and collects construction permit fee revenues – the 2nd largest source of city income after our property taxes. And city hall is after all honest, right?

So now take a look above at those city management quotes about city building activity trends on my analysis pulled directly from city prepared budgeting documents for each of those years. And go ahead and please check me. Go to the Rye City web site and click on ‘Digital Documents,’ then to ‘Budgets’ and then go to the ‘Proposed Budget’ for each year in question and curser down it to page 3-94, ‘Licenses and Permits.’ That’s pretty clear, isn’t it?

Sometime in the recent or not-so-recent past, the city did away with requiring this submission of independent 3rd party proof of actual construction project expenditures that I test-verified. Instead city management substituted a single sheet sworn final cost ‘affidavit’ – financially unverified by anyone other than the individual building contractor or homeowner – thus creating an “I promise to be honest” compliance system.

As I’ve written before, how these unnamed interests succeeded in removing this fundamental proof-of-cost internal financial control protection for the city’s 2nd largest income line item is perhaps a study in hubris, ignorance, political campaign contribution influence, or all three.

History may not repeat itself, but it rhymes. Our internal financial controls were set up as they were back then for a reason. Residents who’ve lived here half a century and over can still sharply recall the unpleasant upheavals erupting out of city hall (then housed in The Square House) and outward into the newspapers, courts and jails.

For those of us who were not yet in Rye then, this recent building permit revenue shortfall story from just across the river might serve in place of those distinctly un-fond local Rye memories –

But the good news here is that Rye City Comptroller Joe Fazzino is an intelligent, honest senior city department head. Perhaps one half of an extra clerical salary position can do the simple ongoing verifications on these final permit cost submissions for him – and our outside audit firm can annually test-verify them just like I did.

All’s Mr. Fazzino and Rye taxpayers here need is a straightforward action directive motion from the City Council empowering a segment focused external auditor special review & investigation – and this time please one not improperly pretext stamped with “Attorney-Client-Privileged -WorkProduct” and then illegally later withheld from FOIL to try and protect the guilty.

With what looks like many missing millions at stake here, time is of the essence.