Rye Group Donates More Bicycles to Those in Need

You have hear about the Rye group Linking Handlebars on MyRye.com before. Linking Handlebars, a not-for-profit organization run by Lucia Villani, Cristiana Villani, Luca Villani, and Jack Bateman, provides the simple privileges of healthier lifestyle, enjoyment of the outdoors and easy transportation to the less fortunate children in our local area by supplying them with bikes. 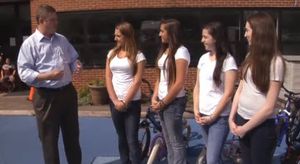 LoHud just ran a write-up about a new effort by the group, working with a cycle club and Miller's Bike Shop, donated 140 bicycles. This past March the group had reported giving away 810 bicycles, so this represents another significant addition to the total.

They worked with logistics director Mike Williams at the Carver Center in Port Chester to bring children to the center on Nov. 25 to choose a bicycle.

Organizers said the bicycle giveaway provided children the opportunity to experience all the benefits of cycling including exercise, transportation, and enjoyment of the outdoors.

The program has given away 1,026 bicycles in under four years. Volunteers will continue to collect bicycles as they gear up for their next distribution in the spring of 2018.

While the program receives bicycles as donations, every bike comes with a new helmet; these helmets and all needed parts and materials used in refurbishing the bikes are purchased by Westchester Cycle Club and Linking Handlebars. To date, both organizations have spent well over $20,000 for the program."

Facebook
Twitter
Email
Previous articleWhere in Rye? – The Answer
Next articleSURVEY: 68.5% Rye High Women Know Someone Who Has Been Sexually Assaulted; 25.7% Report Being Victims Themselves