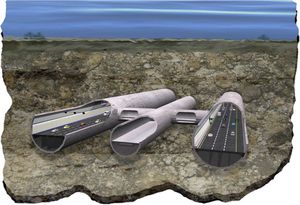 (PHOTO: If the City of Rye is not vigilant, this will be your new front lawn, spewing with 80,000 cars and trucks from Long Island each day.)

Here is Rye resident, former Rye Mayor an State Assemblyman Steve Otis: "As was the case over a decade ago, the key issue for Westchester with any new Long Island Sound crossing in New York or Connecticut will be the county-wide impact on county roads and highways, including the full length of I-287 and I-95. A full traffic study that includes added traffic counts from any new crossing combined with existing conditions on these roads is the key to proper analysis of crossing proposals regardless of location. I requested that NYS DOT include such a study at the budget hearing last week and the Transportation Commissioner indicated support."

Here is Rye resident, former State Senator and new County Executive George Latimer: "I continue to believe the tunnel is not a realistic, cost conscious project; we have many more important capital projects that deserve our limited capital resources. I think, over time, decision makers will see the costs outweighing any projected benefit."

Here is current Rye Mayor Josh Cohn: "Though studies remain preliminary. the City is watching the situation with concern."

We'll continue to ask other local officials for comment.

See one of our officials on the record elsewhere? Let us know.