Rye resident, J/70 World Champion and American Yacht Club sailor Peter Duncan has been selected as US Sailing’s 2017 Rolex Yachtsman of the Year. 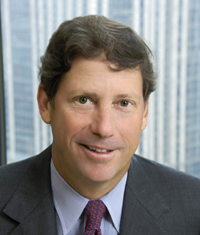 The selection follows the announcement in December of the six men and eight women who were shortlisted for these prestigious awards and recognized as sailing’s top performers of the year by US Sailing.

Duncan scores a new Rolex and a celebratory luncheon next month at the New York Yacht Club in Manhattan.

"Peter Duncan (Rye, New York), 58, a life-long one-design sailor and proud member of the American Yacht Club, was once again at the top of his game in 2017 at the highest-levels of international competition and in a variety of sailboat classes. He received this honorable distinction for first time in his illustrious career.

“I was just honored to be nominated for the award,” said Duncan. “When I found out I won, I was just stunned. It is just so humbling to be associated with so many great sailors who have won this award. It’s an honor of a lifetime.” 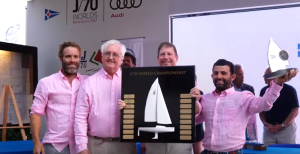 “With all the racing and training we did in 2017, I was actually on the water for 110 days last year, which is absolutely extraordinary. That’s what you have to do to accomplish what we did last year.”

His year was highlighted with a win at the ultra-competitive Audi J/70 World Championship in September off the waters of Porto Cervo in Sardinia, Italy. Duncan and his talented crew including Jud Smith, Victor Diaz de Leon and Willem van Waay, won the 161-boat World Championship by a 15-point margin over contender Brian Keene. Duncan’s Relative Obscurity was dominant through six races. They placed in the top three in each race, including three wins.

“You can’t find a better crew to sail with as far as I’m concerned,” added Duncan. “We got there early to practice and we spent a great deal of time preparing ourselves for this event. It was a serious venture.”

One member of the selection panel noted that “to win first place so convincingly in a highly-talented and large fleet at the J/70 World Championship in Italy is a testament to Peter’s abilities and preparation.”

He won four other J/70 regattas in 2017, including the Italian National Championships (Alcatel Cup), New England Championships, Bacardi Cup and Sail Newport Regatta. His team placed second out of 58 at the J/70 North American Championship in Rye, New York and third at the European J/70 Championship.

“We won the Italian Nationals on the last race of the last day,” explained Duncan. “We got there early and were hopeful to learn a lot about the competition. We knew that the Italian fleet was going to be very strong and it was a very deep fleet. It was really close racing. And again, we got what we put into it. We worked hard and got the result in the end.”

Duncan has been sailing for about as long as he can remember. He started sailing with his parents on the weekends at American Yacht Club in their 210 sailboat.

“I love the competition and I enjoy racing in large fleets. That to me is wildly exciting. But it’s also about all the camaraderie and the people that you meet and the places you go. Luckily, the fleets we compete in are generally the same, so whatever issues you might have had out on the water are usually left on the water and it’s really a great group of people to spend time with.”"

Facebook
Twitter
Email
Previous articleBOE Meeting: Special Meeting, Exec Session (You Are Not Invited…)
Next articleHeard in Rye: Ted Speaker on The Power of Introverts on February 7th