(PHOTO: Elevated levels of Enterococci (AKA Fecal Contamination AKA Poo) found by Save the Sound in Rye storm drains. Now the City of Rye, after a month, is taking action.)

A citizens group is causing a sh*t-storm. Kinda literally.

The group Save the Sound has been reporting elevated levels of fecal matter in storm drains in Rye. This likely means a piece of Rye's aging sewage drains are leaking into the storm drain system – a big no-no and a public health hazard.

The city of Rye says not to worry, this according to a news release issued Friday night at 6:30pm – clearly intended to bury this sh*tty news. In the release, the city says it believes the leaking sewage line is tucked away under I-95 and will have a contractor start a camera based inspection of the sewage line Monday. 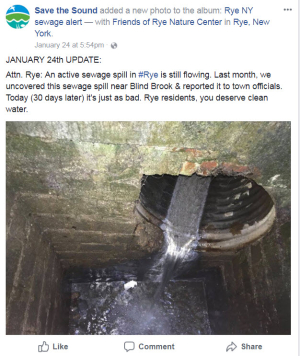 (PHOTO: Save the Sound has been pointing out this stinky situation since December.)

"City Manager Marcus Serrano said Rye received samples from environmental group Save the Sound in December showing elevated levels of Enterococci, a bacteria found in fecal waste, flowing into a storm drain near the intersection of Theodore Fremd and Locust Avenues.

"The city’s investigation remains ongoing, but is confident that this problem will be identified and corrected shortly," the city said in a statement released Thursday afternoon.

Storm drains are meant to allow rainwater from city streets to drain into local waterways without any treatment.

The quality of the city's drinking water is not impacted, Serrano said.

Tracy Brown, Director of Save the Sound, estimates that over 4.6 million gallons of contaminated water has leaked into the storm drain,entering the sewer system. Brown said the number was determined through multiple site visits conducted by the group's scientists on a weekly basis since December.

“It’s not rocket science," Brown said. "There is a leak in the line and there are standard protocols for tracking it down.""

Read the entire story at LoHud.

On December 8, 2017, the City of Rye received sampling results from Save the Sound showing elevated levels of enterococci in a storm drain catch basin within the vicinity of Theodore Fremd and Locust Avenues in Rye, New York. The City immediately initiated an investigation within surrounding neighborhoods to determine the potential origin of the source of the elevated sample results. Over the following weeks the investigation has come to focus
on the possibility of a leak in a City of Rye sanitary sewer line buried deep under I-95 draining into New York State Thruway Authority (NYSTA) drainage structures under I-95. 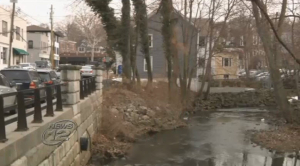 (PHOTO: News 12 reported on the story, saying over four million gallons of poo-tainted water has flowed down Rye's Blind Brook since December.)

On Friday January 26th the City and NYSTA work crews exposed buried sanitary sewer and drainage manhole covers located within the I-95 right-of-way, making access to the pipe system possible. Today, representatives from Westchester County Department of Health and the New York State Department of Environmental Conservation inspected the area with City representatives. The City advised them of the progress of our investigation. No concerns related to public health were raised.

On Monday, a City contractor will be on-site to camera the sewer lines that run under I-95. The sewer lines pre-date the construction of I-95. Access requires coordination with NYSTA in order to provide traffic control and safety measures for the protection of inspection personnel. We hope disruption of traffic will not be severe. The City’s investigation remains on-going, but the City believes that this problem will be identified and corrected shortly.
Dated: February 2, 2018