At its meeting this past Wednesday, the Rye city council formed a "tunnel advisory" committee at the urging of Rye Mayor Josh Cohn. New York Governor Andrew Cuomo recently resurfaced the tunnel proposal.

The Mayor referred to the tunnel as "a problem for Rye". Local officials seem almost universally opposed to the idea with the exception of County Legislator Catherine Parker who said in a statement she was "open". 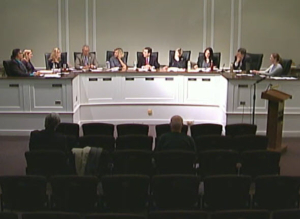 (PHOTO: Rye city council moved to create a tunnel committee to burrow into the situation.)

The advisory group, chaired by the mayor, will be seven members including at least two from the Traffic & Pedestrian Safety committee and three from the Rye neighborhoods that would see the greatest impact. The members are "All TBD at this point," Mayor Cohn told MyRye.com.

In the lead-up to Cuomo's mention of the plan in his recent State of the State address, and the NY State Department of Transportation release of a "Request for Expressions of Interests", Rye City Manager Marcus Serano said there was "not one email, not one call, nothing (from New York State)" in terms of a heads-up to Rye.

MyRye.com has been collecting comments from other local officials on the topic.

"As far as the tunnel goes," said new Counclman Ben Stacks, "I am highly concerned about anything that could have such a huge impact on Rye (naturally) but I also need to see more detail on how and where, exactly, it would link into Rye. With what I know right now, I am opposed to it."

And Sara Goddard, also a new Councilperson and former Rye Sustainability chair, told MyRye.com "This is of paramount concern to me and every council member. We’re discussing the formation of a dedicated committee for the purpose of advising council and the public on any developments."