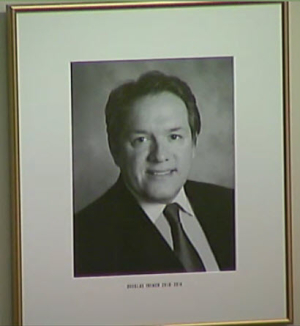 The Rye City Council Wednesday night unveiled the official portrait of former Rye Mayor Doug French, who served January 1, 2010 thru December 31, 2013. MyRye.com contacted French and asked him what it meant to have his "unveiling":

"Yes, we had the ceremony tonight and it was great — and great to be back in City Hall. I was really appreciative of the recognition and comments from Mayor Cohen and the new Council," said French. 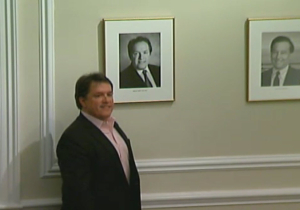 "The Council and staff I served with were all were there and it was a great representation of how well we worked together and respected one another to take on the City’s challenges. I referenced in my remarks that it takes a team and there were two macro challenges we had to deal with during our tenure. First, the wrath of Mother Nature (Irene, Lee, Sandy, Coyotes). And second, the Great Recession (unemployment, wealth loss, property value declines, limited government funding). 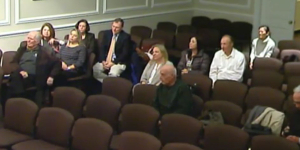 (PHOTO: Some of the old city staff and council members returned for the ceremony including former city manager Scott Pickup.)

So we had to focus on the basics and all pulled together to keep taxes and spending down, reinvest in the City’s infrastructure, successfully reduce the City’s litigation docket, and accelerate quality of life initiatives like pedestrian safety and environmental sustainability."

French finished: "On behalf of those I served with, it was a great and worthwhile experience and we thank the residents of Rye for the privilege to serve. I would recommend it to anyone who wants get involved and make their community better."