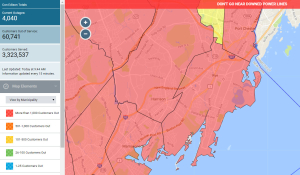 (PHOTO: Con Ed outage map as of Sunday indicated Rye is a "red zone" with over 1,000 customers without power.)

Approximately 1,900 homes remained without power in Rye on Saturday and tree wreckage from the high winds remained throughout Rye.

Greenhaven and areas along Peck Avenue were hard hit according to the city.

Rye Mayor Josh Cohn, in an email to residents, said repairs will take "days" not "hours" according to Con Ed. He also offered up City Manager Marcus Serrano's mobile phone number (914-424-3786) for residents. 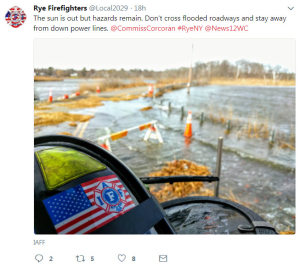 (PHOTO: Rye firefighters local issues a warning into the Twittosphere.)

The storm was bad, but not as bad as was predicted. For that we are grateful. We are grateful as well for the efforts of our police, fire and public works personnel, who worked through the night to keep us safe.

The storm damage in terms of downed wires and trees is substantial. The City is working hard with Con Edison to clear streets, so that power restoration can take place as quickly as possible. Please do not put yourselves in danger by approaching fallen wires or precarious trees. Treat any downed wire as a live wire.

Rye has nearly 2,000 homes without power. Outages are particularly concentrated in Greenhaven and along Peck Avenue.

Con Ed has informed us that Westchester was hard hit and that repairs will take place over days, not hours. Con Ed is working in Rye and we are working hard with Con Ed to maximize resources in Rye. Con Ed is seeking additional crews from other areas.

Flooding occurred in certain customary areas, though we believe without substantial damage to homes. Some roads remain flooded. Coastal flooding may continue as the storm's effects wane. Please do not drive through flooded streets.

The City will continue to maintain a warming center at Rye Rec at least until 6 pm today, and later if needed. Though not a full shelter, the warming center provides a place to warm up, have a hot beverage and charge electronic devices.

In the wake of Hurricane Ida last September, members of the Rye Fire and Police Departments have started to receive training in swift water...
Read more
City of Rye

In a letter to MyRye.com, Mayor Josh Cohn and the six members of the Rye City Council want you to know there is a...
Read more