Rye Mayor: “(Rye) DPW was out there before Con Ed…”; ConEd Misrepresenting Facts

In a note to residents Saturday, Rye Mayor Josh Cohn kept ConEd in the cross hairs. He rejected ConEd's accusation that DPWs were slow to clear the roads of downed trees, that in turn made their work impossible.

"(Rye) DPW was out there before Con Ed," said Cohn. He went further, to accuse ConEd is misrepresentation: "(On Thursday) Rye was told on the elected officials call that there were ten work crews in Rye. Our police department scoured Rye for work crews. We found only one work crew in all of the City of Rye. That is one, not 10."

Of course, the blame game won't help fix things for those still without power. But maybe there are changes that can be made for next time. Read the full communication below: 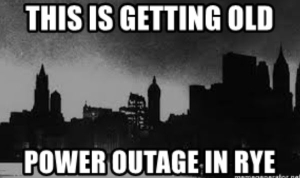 Information regarding warming locations and dry ice pick-up may be found at the bottom of this message. Please continue to treat all downed wires as live wires.

Would all Rye residents without power please report your address and when your power went out by email to the City Manager, Marcus Serrano, or by telephone if email is not available to you. The City Manager's email is mserrano@ryeny.gov and his phones are (o) 967-7411 and (c) 424-3786.

According to Con Ed, the number of outages in Rye is reducing, however slowly. The wait for restoration is intolerable for those who lost power in the second storm, and even more so for those now waiting 9 days since the first storm. The CEO of Con Ed, whose job is now threatened, is blaming town DPWs across Westchester and Rockland for not clearing trees ahead of Con Ed's crews. Know that your DPW was out there before Con Ed and Con Ed's problems in Rye have been Con Ed's problems alone.

Below is a statement that I had read for me on yesterday's municipal officials call with Con Ed.
——————————————–
"I apologize for not being on this call. I am at the County Executive's press conference on Con Ed, in the hope that might do some lasting good.
Yesterday, Rye was told on the elected officials call that there were ten work crews in Rye. Our police department scoured Rye for work crews. We found only one work crew in all of the City of Rye. That is one, not 10.

We have been told that Con Ed does first the repairs that benefit the most people. This one crew was working at a remote, two-customer location.
We have examined Con Ed's work list for Rye. Ten percent of the streets listed are in other towns. Many of these streets are far from Rye's borders. And the work list is missing locations in Rye where we know old and sick people, and others with small children, are struggling in the cold and dark. We know they have reported their outages. In what town are they listed? How can we even begin to look after them?

On Tuesday night [I have since learned it was Sunday], a Con Ed crew turned off power to those who had it in order to complete a nearby repair on Brookdale Place The crew left without completing the repair, leaving everyone dark. Jane Solnick, the [Con Ed] Westchester municipal rep, committed to me on Tuesday night that as soon as restoration work began again in Rye after Storm Quinn, the repair on Brookdale place would be completed. Solnick's commitment was false. Brookdale and its cold neighbors on Milton Road are still waiting.

I will take the risk of speaking plainly. The people of Rye and their representatives have been misserved and misled by Con Ed. And, by the very individuals who are leading this call now. This is intolerable. Those of us who are elected officials need to think hard about what we can do about this."
——————————————–

Brookdale and many other locations in Rye remain without power. Your City continues to press Con Ed.

Our Rye Rec warming center, with hot beverages and device charging available, will be open until 5 today. It will be open from 11 to 6 on Sunday and from 8:30 to 8:30 on Monday. The library is open until 5 today. It will be closed on Sunday, but open Monday from 9:30 until 5. Con Ed is distributing dry ice at 515 North Avenue, New Rochelle, in the parking lot behind New Rochelle City Hall.

Please call 911 for emergencies. The police non-emergency number is 967-1234. City Manager Serrano's information is above. I can best be reached at jcohn@ryeny.gov.