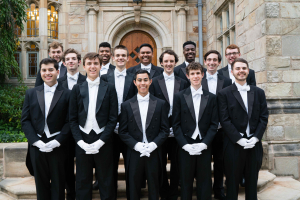 These tuxedoed college kids have been in Rye before. Now they plan to sing themselves into Rye Presbyterian Church. Check it out:

The Whiffenpoofs, Yale’s premiere a cappella choir, present an evening of pop standards in their inimitable, cultured style, including jazz-era ballads, traditional songs, and more than a little bit of rock ‘n’ roll.

It will be a night of diverse selections, including classic jazz standards like A Nightingale Sang in Berklee Square, popular music such as I'm Not the Only One, and Whiffenpoof classics like Rainbow Connection and The Whiffenpoof Song (covered by such greats as Bing Crosby and Elvis Presley). With a wit and charm that has been honed over a century, the Whiffenpoofs are sure to delight any audience member, no matter what age.

Each year, fourteen Yale seniors are selected to be in the Whiffenpoofs. Those selected carry on an over-a-century-old tradition with more than two hundred performances each year in such venues as Carnegie Hall, Broadway's Lincoln Center, the World Series, and the Rose Bowl. The Whiffenpoofs have been featured on NBC's The Sing Off, The West Wing, The Today Show, 60 Minutes, Gilmore Girls, Jeopardy!, Saturday Night Live, and Glee.