If you missed this one, things got pretty crazy last Thursday in Rye when a 25 year old man stabbed his brother. 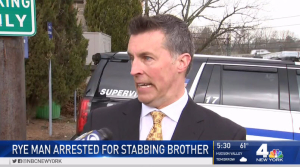 (PHOTO: Rye PD Commish gives NBC 4 the low down on the stabbing.)

"The suspect was having a "mental episode" during a domestic incident, police said, so his name wasn't released but he was charged with second-degree assault, a felony, and menacing, a misdemeanor. Additional charges could be added police said.

The incident started around 8:50 p.m., when the suspect ran from his home to the home of a clergyman, who knows the suspect.

His brothers followed him into the clergyman's Boston Post Road home, police said. When they tried to restrain him, the suspect grabbed a 13-inch butcher knife and stabbed his brother under the armpit, according to police." 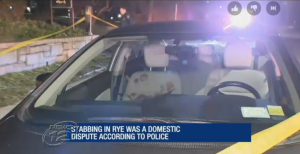 (PHOTO: News 12 showed the vehicle with the victim's blood visible in the passenger seat.)

Facebook
Twitter
Email
Previous articleMoor, Sit Down, Pledge, Showcase: Items on the Rye City Council Agenda for Wednesday, April 11, 2018
Next articleOn Saturday, Get Fuzzy and Have a Hot Coffee with a Rye Cop

The Rye Police Department has made an arrest after a burglary and assault in Rye's Milton Point neighborhood in the early hours of Wednesday...
Read more
Police & Fire