Rye's Colin Moran made his mark Monday as the new third baseman for the Pittsburgh Pirates, clearing a Grand Slam and helping the Pirates sweep their first four games with a 5-4 win. It was Moran's second major league home run. 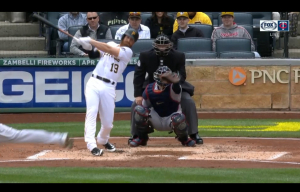 Moran went to the big leagues in 2016, and just last year wound up on the DL after catching a foul ball with his face. Monday was a much better day.

And listen to what Moran said in the locker room to reporters about his grand slam:

"Moran did little during spring training to hint at the power potential the Pirates saw in him when they made him part of the deal that sent Cole to Houston in January. Even as Pittsburgh led the Grapefruit League in homers, he failed to go deep even once.

Then Moran swung at a full-count fastball from Minnesota's Lance Lynn with the bases loaded in the first inning on Monday. A minute later he was taking a curtain call after the first grand slam of his young career helped the Pirates edge the Minnesota Twins 5-4 to give the franchise just its third 4-0 start in 35 years.

"Probably one of the coolest things I've ever experienced on a baseball field," Moran said after hitting his second home run in the majors."

A big Rye shout out to Colin Moran! 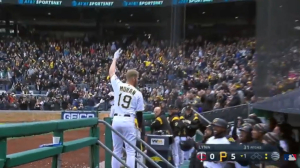