Rye is the one Westchester community that has score on a list of the top 30 towns across the United States, with a median income of $162K and a median home value of $1.1M. 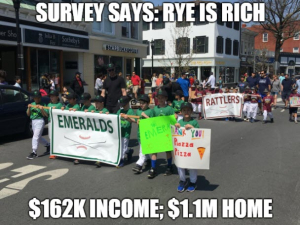 "One Westchester County community cracked the top 30 list of America's richest towns, along with several other nearby communities in New Jersey and Connecticut.

Rye, New York, had a median household income of about $162,000, which joined other key factors in placing it No. 30, according to USA TODAY Network.

The typical American household earned $55,322 in 2016, roughly $4,000 higher than 2009’s median income of $51,425. In a number of small towns throughout the country, more than half of households earn more than three times the national median. And incomes in these places are growing faster than they are nationwide.

Rye, home of Rye Playland, joined other Westchester communities that have ranked among the richest across the country, including past richest town designee Scarsdale, and richest ZIP Code awardee Purchase.

To determine America’s richest towns, 24/7 Wall Street reviewed household income data from the U.S. Census Bureau’s American Community Survey in every American town with a population between 1,000 and 25,000. For comparison purposes, boroughs, census-designated places, cities, towns, and villages were all considered…

Adults with at least a bachelor's degree: 73.2%

Read the 247WallStreet survey of the 30 richest towns.

The Government of Zimbabwe is planning to rebuild its official residence in Rye, to be used by the head of its United Nations Mission....
Read more
Open Houses