Zoltar, from Rye Playland and the Movie “Big” Turns 30 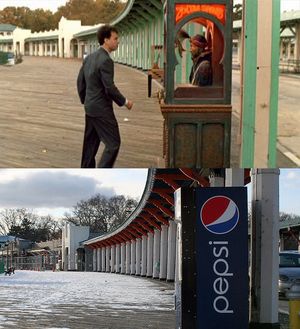 (PHOTO: Back in 2011, you could find a Pepsi machine in the same spot Zoltar occupied in the movie Big.)

LoHud had a nice write-up on the anniversary of Zoltar, the movie Big and the Rye Playland connection:

"RYE – There’s a spot on the Playland boardwalk, near the bus stop, where vending machines sit under an old wooden canopy that overlooks the beach and an inlet of the Long Island Sound.

Zoltar Speaks was the name of the wish-granting machine in the movie “Big,” which is back in theaters for its 30th anniversary on July 15 and 18. Three decades later and the movie is still the first thing many people think of when passing the spot.

“I remember seeing the movie and going, ‘I know where that is, I used to go there as a child,'” said Lucille Giardino, who was walking there one recent afternoon. She visits often in summers and Big is never far from her mind…

“Big” tells the story of a 13-year-old boy who makes a wish to become big and ends up as a man in his 30s. Now in the body of a grownup played by Tom Hanks, his love of games leads to him becoming a toy company executive in New York City, where he falls in love with a co-worker, played by Elizabeth Perkins.

The two dance on Playland’s boardwalk during a big band concert in one scene, oblivious to the nearby, dormant Zoltar machine.

When Hanks’ character tires of being an adult, he tracks down Zoltar to a vacant Playland – Sea Point Park in the movie – and wishes himself back to childhood. In the scene, he gets out of a taxi at the circle at Playland's entrance, then runs left (although the boardwalk is actually to the right)…

Tartaglia, the parks commissioner, said "magic" and the connections to childhood were similarities between the movie plot and the park.

"It’s a magical movie and a magical place, so it just kind of fits," he said.

The connection is so strong that it has spawned a bit of an urban legend. Some people remember an actual Zoltar machine on the boardwalk, though it was only a movie prop and no fortune-teller machine was ever at the spot depicted in the movie."