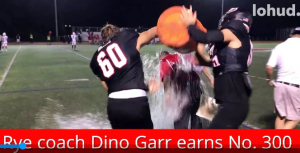 "Dino Garr and his players never talked about No. 300. Garr never knew what the parents and the school had in store for him, but the celebration began in the waning seconds when Rye beat Sleepy Hollow 47-7 Friday.

As Garr watched his team kneel out the win, seniors Jack Iuliano and Lachlan Nelson surprised him from behind, bathing the Garnet coach with the Gatorade bucket.

He was later given mementos to commemorate his 300th career win during a postgame ceremony at the 50-yard line.

"I really hadn't thought about it," said Garr, now in his 40th season as head coach. "It kind of hits you in the face — in this case, the water — when it happens. I didn't realize they were going to do this kind of stuff."

Garr, who has the sixth-most wins in state history, joined Tony DeMatteo (Roosevelt/Somers) as the only 300-game winner in Section 1.