Living in Rye: Rent vs. By Decision Featured in NY Times

Renting before buying – in Rye and surrounding communities – seems to be a trend.

The New York Times highlighted the trend and featured one family selling in Rye and renting in Darien (Scott and Nina Ackerman) and one family having recently bought in Rye after first renting (Harper and Scott Mates). 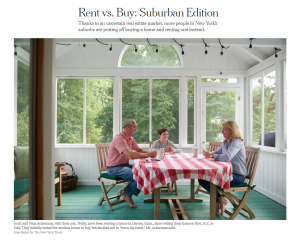 Here is the excerpt:

"Over the summer, Scott and Nina Ackerman, both 49, decided not to buy immediately after selling the home in Rye, N.Y., where they lived for 17 years. Mr. Ackerman was transitioning out of a career on Wall Street to open Club Pilates studios in Fairfield County, and two of their three sons had gone away to school. But as the couple considered the ample supply of houses for sale in New Canaan and Darien, their preferred towns, they couldn’t find exactly what they wanted.

“I felt like, why force the issue of buying when you can rent?” Mr. Ackerman said.

They are now renting a four-bedroom home in Darien for $7,000 a month. And “home prices seem to be coming our way,” he said. “We made a good sale, and I think we’re going to have an opportunity.”

Younger couples are also taking their time with those transitions. Harper and Scott Mates spent a year renting a seven-bedroom house in Rye, N.Y., before deciding to buy their own home there this summer. Coming from the city with three young children, they knew they wanted to stay within reasonable commuting distance of their jobs, but weren’t certain Rye would be the best choice.

“We both commute every day,” said Ms. Mates, 36, who works in private equity. “Renting afforded us the ability to say, well, actually maybe we want to be in Greenwich.”

Instead they fell for Rye, where the median sale price of a house was just under $2 million in July. As the end of their lease approached in August, they jumped on a five-bedroom house on an acre within a few days of its listing.

Renting for a year didn’t necessarily enable them to get a better deal on a house, said Mr. Mates, 39, who also works in finance, but it prevented them from making a costly mistake. “Spending all this money on rent for a year is a heck of a lot cheaper than buying a place we don’t like and having to sell it and move again,” he said.

And they know they are not alone in their thinking: At a recent play date with children in their oldest child’s kindergarten class, the Mates met three other families who had done exactly the same thing."