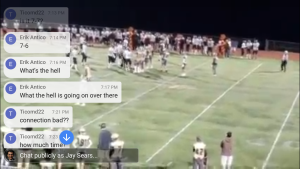 Rye Garnet football defeated Clarkstown South Friday night in a nail bitter  28-21. Fans live-streamed the game via YouTube. Not exactly ESPN quality, but you could feel the excitement coming across your mobile device.

Rye will play John Jay-Cross River for the Class A championship this Friday at 7:30pm.

LoHud.com had the details:

WEST NYACK – Halloween may still be almost a week away, but Rye and Clarkstown South decided to give fans a thriller of a night under the moonlight Friday.

Rye head coach Dino Garr said after last week's win against Nyack that his Garnets would have to play "a perfect game" to knock off the undefeated, top-seeded Vikings. After grinding out a 28-21 win over the hosts and punching a ticket to the Section 1 Class A championship game next week, Garr reflected on the game.

"It wasn't perfect, but man, we did enough perfect stuff," he said.

Rye (8-1), the No. 4 seed in the tournament, exploded for three touchdowns in the second quarter after a stagnant start to the semifinal contest. South (8-1), which handed the Garnets their only loss of the season earlier this year, took back the lead in the third quarter and held it for most of the fourth."