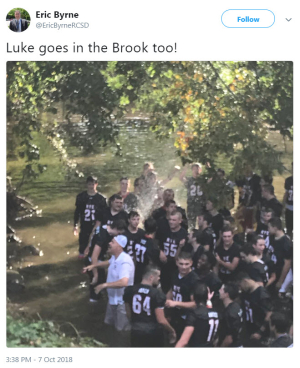 (PHOTO: Rye Garnets celebrate in the Blind Brook after the win over Harrison.) 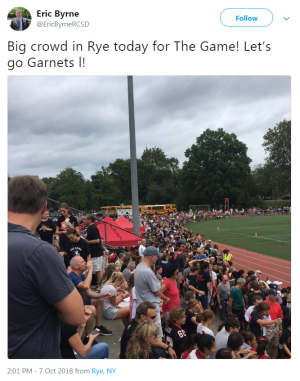 The Rye Garnets ground down the Harrison Huskies 41-14 in the 89th year of the epic high school football rivalry. Missed the game? Watch the replay.

LoHud has the write-up:

RYE – The 2018 Rye Garnets are a relatively young bunch, led in large part by a talented junior class.

Chad Antico is one of only a handful of seniors who sees significant playing time, and when he took the field Sunday, he felt the emotion of what he thought would be his final competition against neighboring Harrison.

“You have to take a moment to realize what’s going on,” he said. “You have the whole city of Rye on your back and playing for the alum that have come before me is awesome. It’s like nothing else.”

Rye fed off the energy at jam-packed Nugent Stadium and romped its way to a 41-14 win in the 89th annual meeting between Westchester County’s biggest rivals. 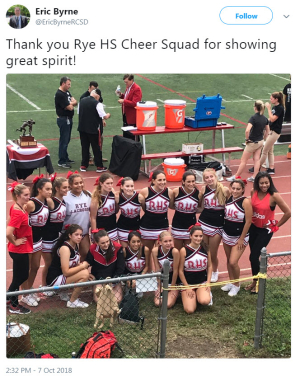 But as it turns out, Antico and the rest of the Garnets will see the Huskies again this season. With the Class A playoffs beginning next weekend, fourth-seeded Rye will host No. 13 Harrison for the second consecutive week.

For Harrison to have any chance at reversing the result and pulling off the upset, it will have to prove it can stop a dynamic Garnets’ passing attack. Two of the first three passes Rye junior Declan Lavelle threw went for touchdowns, helping his team jump out to a 21-0 first quarter lead.

“He’s an amazing quarterback and we have a special team,” said Antico, who caught touchdown passes of 33 and 9 yards. “It’s going to be a great time in the playoffs.”

Lavelle has made the Garnets’ offense even more difficult to defend by utilizing a variety of weapons. He completed passes to six different receivers against the Huskies, adding an element of unpredictability.

“We have a ton of depth,” Lavelle said. “We have the starters, and then there’s even more depth after that. I love sharing the ball with everyone. It’s very important to spread the ball out and keep the defense on their toes.”

As for the Section 1 playoffs, Rye will enter as one of the leading contenders in Class A. Its only loss this season came against top-seeded Clarkstown South, 49-28, and it could potentially run into the Vikings in the semifinals." 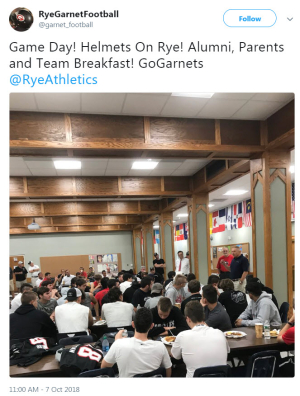 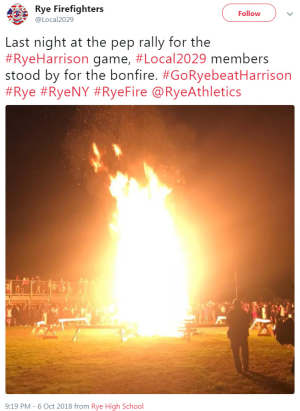