Son of Rye Based TV Reporter Wanders in Live Shot

A Rye based reporter for NFL Network who sometime appears on live TV from his basement had his young son wander into the live TV shot. 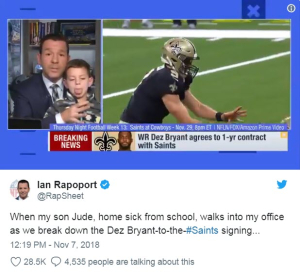 Ian Rapoport was on live TV, broadcasting from his Rye home when his son, Jude, wandered into the live programming. From the Washington Post:

"Ian Rapoport’s son barges his way into NFL Network live shot, spices up Dez Bryant news… Last year, Columbia College Today profiled NFL Media’s Ian Rapoport, Class of 2002, who discussed at length how he often has to drop what he’s doing to address the latest news of the day on NFL Network. Those responsibilities include appearing on live shots from the basement office of his home in Rye, N.Y. The article also mentioned in passing that his sons Max and Jude “enjoy playing in his home studio.”.

Despite not being 100 percent while home sick from school on Wednesday, young Jude showed admirable motor in forcing his way into the picture during a discussion of Dez Bryant’s deal with the Saints."

When my son Jude, home sick from school, walks into my office as we break down the Dez Bryant-to-the-#Saints signing… pic.twitter.com/BpSLHlkRlb