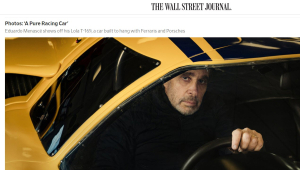 Eduardo Menascé likes cars. The Rye resident, retired Verizon exec, and company advisor was recently featured in the Wall Street Journal with his new addition to his colection, a Lola T-165. The car was manufactured by the now defunct British Lola Cars International Ltd.

Here is an excerpt of the story:

+Eduardo Menascé, 72, a board member of public companies and a former Verizon executive from Rye, N.Y., on his Lola T-165, as told to A.J. Baime.

I was born in Argentina. I lived in Brazil, then the United States, France for 10 years, then Brazil again, Venezuela, Argentina and finally back to America. In all these countries, I found one thing in common: People who are as crazy about cars as I am. It is in my DNA.

Today I have a collection of several sports and racing cars—including a LaFerrari, which is the most technologically advanced Ferrari ever produced, and a 2005 Ford GT. The most visceral driving experience I have encountered, however, is the car you see here: the Lola."