There was a good amount of coverage of Marc Jacobs fabulous party for 700 at the old Four Seasons on Saturday, April 6th to celebrate the marriage between Jacobs and Char Defrancesco.

But don't miss that the actual wedding – for only 40 – was at the couple's new home in Rye.

There is Manhattan exclusive. And then there is Rye exclusive.

Best wishes to the newlyweds. 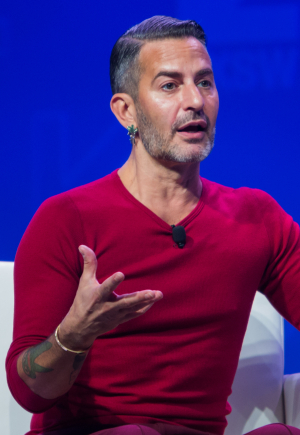 It was a fairy-tale wedding with an unconventional cast: Marc Jacobs, the New York designer, and his betrothed, Charly “Char” Defrancesco, a modern-day chandler with the build of a modern-day goliath, danced the night away in the shadow of a cake taller than either. Seven hundred friends and family attended, including a few crashers (not us!) and enough famous fairy godmothers to stock a Disney studio for the next hundred years: Naomi Campbell, Kate Moss, Bette Midler, Anna Wintour and Lil’ Kim.

On Saturday night, behind the swaying metal curtains of the Grill and the Pool (née the Four Seasons), Philip Johnson’s modernist masterpiece on East 52nd Street, the guests descended. They had come from all over (people in the industry joked about “fashion buses” arriving for the weekend), super-fit per usual, but bloated with anticipation.

Bryanboy, a.k.a. Bryan Grey Yambao, the blogger-turned-fashion influencer whose early adoration of the Marc Jacobs label led Mr. Jacobs to name a bag in his honor, flew from Sweden to attend.

“There was this expectation that it was going to be the wedding of the century,” he said. “And it was.”…

Mr. Jacobs, who turns 56 on April 9, may be showing signs of settling down in the good old-fashioned newlywed tradition — he and Mr. Defrancesco, 36, will be decamping, at least part time, to the suburbs, more specifically to a 1955 Frank Lloyd Wright house in Rye, N.Y., where the actual wedding ceremony was held for a much smaller group of 40 intimates on Friday — but pomp and circumstance still have a place in his heart."