The mudslinging is picking up steam over Rye Playland.

Standard Amusements PR firm Sunshine Sachs must be working overtime. The headline in the NY Post from last Saturday almost certainly is their handiwork: 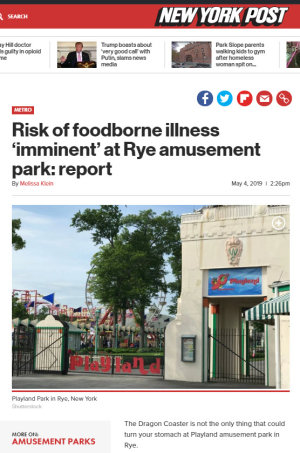 "The Dragon Coaster is not the only thing that could turn your stomach at Playland amusement park in Rye," starts the piece in the Post, attacking the county owed Playland for lax food safety issues.

"Three years’ worth of inspections at the Westchester County-owned park have found potential pitfalls with food safety, according to copies of the reports obtained by The Post.

“The risk of a food-borne illness at Rye Playland is imminent,” wrote food safety inspector Michael Friend in a March 2018 report on the park commissary before it opened for the season last year…

The inspector turned up “filthy, grease-laden cases,” chipping lead based paint, an empty trap where “the rat got the bait” and no evidence of a proper pest control program.

“Feral cats are not an approved nor a reliable method of rodent control,” he wrote.

Friend noted that a barbecue area was at risk from “birds defecating from above given the close proximity to the Long Island Sound.”

Friend said there were not enough hand-washing sinks in the commissary, which is located below the famed wooden roller coaster. “Eighty percent of reported food-borne illness is due to improper hand washing,” the report says.

The report was prepared for Standard Amusements, a company that the county retained in 2016 under a 30-year deal to first co-manage and then run the park, an arrangement that has now gone south. Standard Amusements was to sink more than $27 million into Playland.

Standard Amusements, which did not operate the food concession, sent the report to the county in April 2018.

The company said that the county “ignored the report’s findings and instead attacked [Standard Amusements] for having arranged the inspection,” according to a January letter the company lawyer sent to County Executive George Latimer, which was obtained by The Post.

Latimer, a Democrat, last week ended the contract with Standard Amusements, a deal inked by the prior Republican administration, over issues including profit-sharing."