Update: Moulton's maiden name is actually Naiman (not Boardman). Thanks to Tim Biba at the Moulton campaign for setting this straight. Turns out Heavy.com had made an error that we picked up when referencing that source.

The wife of Presidential candidate and Massachusetts representative Seth Moulton hails from Rye.

Elizabeth Moulton (maiden name Naiman) is a graduate of Rye High School. If her husband Seth, one of twenty odd Democrats in the race, wins the White House, she will be the second First Lady from Rye, joining Barbara Bush. 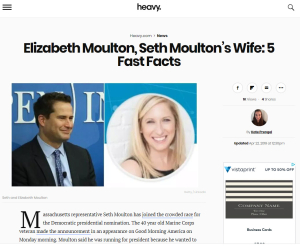 Moulton attended Rye High School, a public school in Rye, New York. Rye is a prosperous suburb of New York City. The Washington Post named Rye one of the country’s “superzip” areas for its high average household income and its high concentration of college-educated residents."