Letter to the Publisher from Rye resident Brian Hayes: 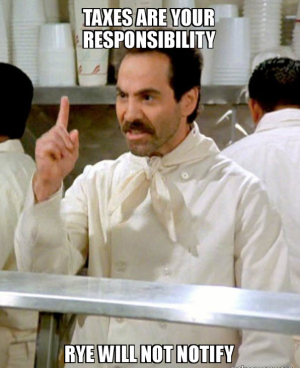 I’m a new resident of Rye who moved to the city about 9 months ago. With interest rates dropping since the time I bought my house, I decided to refinance my mortgage.

When it came time to close the loan, I was made aware by the title company that my property had unpaid school taxes for the 2018-2019 school year.

The unpaid taxes occurred for no other reason than I was not informed that I owed them. (I have paid my city and county taxes as they came due.) Online records on the school district’s system still show the former owner as the owner of record; as a result, tax notices have been sent to them and not me.

In talking to Gabriella O’Connor at the Business and Finance department, I found the explanations for why I was not notified about school taxes due to be wholly inadequate. It turns out that the school district only updates their tax rolls twice a year before the August and November due dates. And so due to essentially random bad luck, my transaction occurred at a moment where their records weren’t updated in time to notify me of the due date. And since they don’t update their records again until July, I’ve accrued month after month of late fees in the interim.

In this day and age, it is easy to find the owner of record on a property. A simple search of the Westchester County Clerk’s online records can find every real estate transaction practically in real time. A high school student could probably code a program capable of scraping that information daily for the school district. That an entity empowered to collect taxes—like the school district—can’t figure this out in a timely fashion is embarrassing.

Ms. O’Connor’s rationale for why the late fees that I have been assessed are appropriate is that it is the taxpayer’s responsibility to know when taxes are due. While that may be the letter of the law, I believe that it is also the case that the school district must make minimal effort to keep their tax roster up to date. With their systems still showing me not as the owner of my home more than 9 months after purchase, I feel strongly that the school district has failed in that capacity.

I support our schools—I voted yes on all three proposals on Tuesday’s bond bill. But as a taxpayer in Rye, I will not support incompetence, and Rye residents deserve better than the introduction I have gotten to the school tax system. A school district that asks its residents for $80 million dollars should be more capable at managing its cash flow.

I implore the school district to invest in a process that updates its tax rolls in a timely fashion so others don’t face the same aggravation I have encountered in the past few days.