Zahm Opinion: We Need a More Responsible School Bond – So Vote NO Tuesday 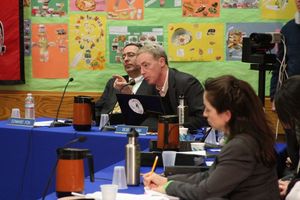 (PHOTO: Bob Zahm at a joint Board of Ed and City Council meeting in 2010.)

Rye City School District voters have another opportunity to express their feelings about spending $80 million on our schools. While re-packaged to make just about all the proposed work look like it is necessary maintenance, this is really the same bond rejected by voters a short while ago.

In addition to attempting to make all of the proposed work look absolutely necessary to keep our children from learning in unsafe, unhealthy environments, the re-packaging also attempts to provide a facade of choice. Voters have the opportunity to support almost $72 million of the proposed spending while rejecting approximately $8 million. But this choice ignores the true needs of the District being closer to $32 million.

Using the District’s own estimates, we can see that the real question should have been approving the maintenance work ($32 million) versus the add-ons ($48 million) for things like air conditioning gyms, building “curiosity centers”, creating a “Design Research Center”, adding a “HS Lab & Connector”, enclosing one of the two HS courtyards to create a “Global Learning Commons”, etc. We don’t have that choice because the District has chosen to re-package the spending in such a way that the really necessary maintenance work can be used to attempt to justify many of the nice-to-haves included in the bond.

A careful homeowner might ask the question, “How did the need for maintenance spending get so out of hand?” The District will tell you, “It’s the tax cap. We can’t ask for more money on an annual basis to fund the necessary facilities work.” Well, that’s not really true. Over the past 6 years, the District’s cash-on-hand (also known as fund balance) has grown year-in and year-out to a total (per 2018/19 audit) of $22.3 million. Again, the District will tell you that most of that money can’t be used for facilities work because of New York State regulations allowing only “undesignated fund balance” (approximately $3.6 million as of the last audit) for facilities work. In fact, as part of its annual budget, the District can choose to include as much of the total fund balance for facilities spending (or other spending, too) as it wishes. So please do not be misled into believing that the District doesn’t have money to spend on facilities because of the tax cap. The District is where it is because of decisions made by the current and previous Boards to defer needed facilities spending in favor of growing reserves.

The only way for the community to get a more responsible bond that addresses the true safety and health needs of our schools is to vote No on the bond Tuesday June 11.