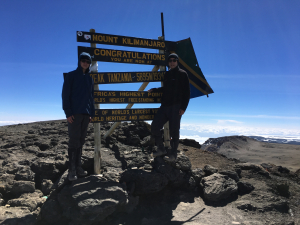 On Monday, July 1, 2019, MyRye.com Publisher Jay Sears summited Mt. Kilimanjaro with his son Noah. At the summit, Sears recorded a video thank you to the Rye YMCA for preparing him for the climb. "Special thanks go to a great group of women at the Rye Y – Laura Laura, Maiju Savage and Denise Cypher," said Sears.

Mt. Kilimanjaro is the highest mountain in Africa, at 5,895 metres (19,341 ft) above sea level. Sears and his son Noah (Rye High 2019, Tulane Class of 2023) arrived at Uhuru Peak, the highest summit on Kibo's crater rim (Kibo is the highest of the three volcanic cones on Kilimanjaro) at 1:45pm on summit day. Including the time walking in the actual crater itself, the two spent 11 hours on summit day on accent and decent from and to base camp.

Uhuru is Swahili for freedom. The peak was given the name Uhuru when Tanzania gained independence in 1961.

Watch the video thank you: