Locals know him as a life long Rye resident, AYC member and remember his time on the Rye City Council. Duncan Hennes also has a lifetime in finance, including working with George Soros and earlier being part of the group cleaning up the Long Term Capital Management fiasco.

Now he is about to sail into town with his own special brand of Alchemy – a new custom built 53 foot sailboat.

Sounds pretty cool, check it out: 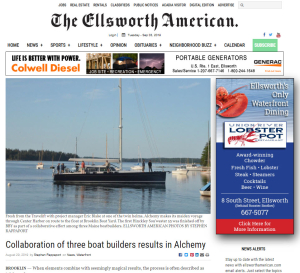 BROOKLIN — When elements combine with seemingly magical results, the process is often described as “alchemy.”

And when noted yacht designer Bill Tripp got together with three Maine boatyards — The Hinckley Co. in Trenton, the Brooklin Boat Yard and the Front Street Shipyard in Belfast — the result was literally Alchemy, a modern, Bill Tripp-designed pilothouse sloop launched at BBY on the 7 a.m. tide Monday.

Hinckley and BBY have both established worldwide reputations for the boats they build in yards that are just a few miles apart, but their first collaboration arose from a unique set of circumstances and knowledgeable customers whom BBY owner Steve White described as “a real joy to work with.” 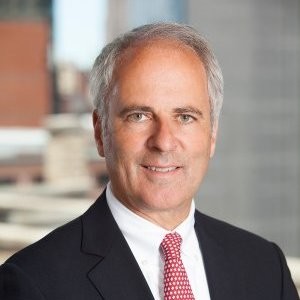 Those feelings were reciprocal, said Duncan and Laura Hennes of Rye, N.Y., on Long Island Sound, as they waited patiently in the morning chill for their new boat to be launched….

…Hennes is an experienced sailor who has raced a J/105 “round the buoys” and a larger J/44, both production boats, offshore. When he decided it was time for a new boat devoted to cruising he turned to naval architect Bill Tripp III of Norwalk, Conn., for the design.

“He’s a genius, a good friend of mine and the production boat I wanted didn’t exist,” Hennes said.

What Hennes wanted was a cruising boat with a large, deck level pilothouse “where you don’t have to go downstairs for a cup of coffee.” At one point, he considered switching from sail to power to achieve the level of comfort he sought….

…Alchemy has a single-level layout and a pilothouse with surrounding views from every direction. The pilothouse acts as an indoor/outdoor room, providing expansive, temperate space and natural light while running the boat from a joystick-equipped helm or entertaining in any weather. A sliding glass door design provides the flexibility and comfort.

Down two steps area a double stateroom to port with separate head to starboard and a spacious owners stateroom with private head and shower. Two steps down to port at the after end of the pilothouse is another double stateroom for a captain or occasional guests.

The deck and pilothouse structure, built at Front Street, is primarily constructed of epoxy-infused e-glass, a lightweight, high-strength woven glass fiber cloth. Once the deck was in place at BBY, the manufacturer of the glass pilothouse windows measured the openings with a laser, the delivered the finished glass inserts…

Alchemy will remain in Brooklin for about 10 days before her owner sails her back to her home port at the American Yacht Club in Rye."