Serendipity Labs, a co-working / shared office company founded and based in Rye, recently announced it will continue its expansion. The firm intends to add eight locations in the US, bringing the total number of locations to 43.

Its Rye location, at 80 Theodore Fremd Avenue, used to be the location of Biltmore Motors, a used car dealer.

LoHud.com had a write-up on the Serendipity expansion: 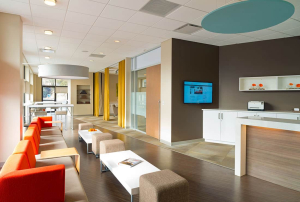 Private coworking group Serendipity Labs plans to open at least eight locations in the U.S. in 2020.

Based in Rye, the company will add a total of 130,000 square feet of coworking space to its portfolio, bringing its total number of locations in the United State to 43.

John Arenas, CEO of Serendipity Labs, said the new locations will enable the company to enter six suburban and secondary markets in 2020.

The company, he said, has been bolstered by increased demand for flexible leases over long-term commitments nationwide.

“Landlords are in the mode of becoming more flexible not less flexible,” Arenas told The Journal News/lohud. “Large companies are trying to reduce the amount of space they are leasing, particularly in smaller offices and regional offices. By having a [footprint] in secondary markets and the suburbs, we can be an outsourced office for companies.”

Serendipity Labs will open in the following cities:

…Serendipity Labs opened its first location in Westchester in 2013 in Rye. The company has since grown to 43 locations around the country. Arenas said Serendipity intends to open an additional 10 locations in 2020."