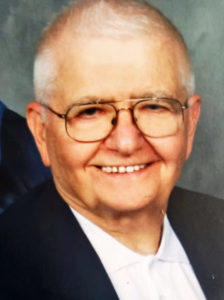 Mr. William (Bill) H. McKenna – a New Rochelle native and current resident of Rye, NY, passed away peacefully on April 5, 2020. He was 88 years old. Bill was the son of famed New Rochelle Football coach William H. McKenna for whom the New Rochelle High School Football field is named, his mother Virginia Fanelli McKenna was a long time secretary of New Rochelle High School. Bill was a 1949 graduate of Iona Preparatory School in New Rochelle, NY where he recently attended his 70th reunion. After graduating from the University of St. Michael’s College of the University of Toronto, he played for the Toronto Argonauts. After serving in the US Army in Germany from 1952 to 1954, Bill returned to New York and received his law degree from Fordham Law School.

Bill, proudly served New York State and Westchester County as a prosecutor and Assistant District attorney for 34 years. Bill was later appointed Deputy District Attorney and Chief of the Organized Crime Division; Rackets, Homicides, Narcotics and Arson. Bill became a voice of reason and during his tenure he became trusted advisor to the famed District Attorney Carl Vergari, and all in law enforcement.

After “retiring” later became of counsel to the law firm McGovern, Connelly & Davidson in New Rochelle until 2019. He also served on the Board of Directors of William H. Sadlier Inc. for over 30 years until 2006. Bill, was elected to the Board of Governors of Westchester Country Club from 1997 to 2006, and for many years served as head of the Legal Committee.

A memorial could not be arranged due to the ongoing COVID-19 crisis. One will be scheduled at a later date to celebrate his life. In lieu of flowers, donations may be made to: Christian Brothers Foundation, 260 Wilmot Road, New Rochelle, NY 10804.