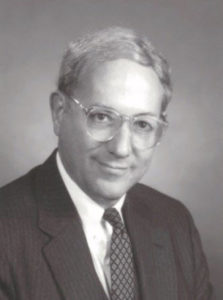 Maurice J. “Bud” Murphy died peacefully in Rye, NY on April 2, 2020. He lived a long and full life before succumbing to complications from Alzheimer’s Disease at 89 years of age. He was predeceased by his parents, Maurice F. and Irene O’Hara Murphy, his sister Irene K. Murphy and his two sons, Michael and Quentin Murphy.

Bud grew up in New York where he graduated from Regis High School in 1948. He attended the University of Notre Dame on a Naval ROTC scholarship and graduated in 1952. After serving as an officer in the United States Navy, he went on to earn a law degree from Columbia University and a Master of Laws in Taxation from New York University.

During his time at Notre Dame he met and later married the love of his life, Irene “Bunny” Fay Murphy. They had eight children, Michael and Quentin who predeceased him, Mary Stenger, James (Patricia) Murphy, Eileen Murphy (Gene Whyte), Robert (Amy) Murphy, Catherine (Daryl) Salamone, and Julia Murphy. He is also survived by grandchildren Ted, Quentin and Mia Stenger, Luke and Nora Murphy, Eugene, Quentin and Katherine Whyte, Seamus, Liam, Conor, and Pierce Murphy, Zach and Zoe Palencar, and Madeline, James and Robert Salamone as well as seven great grandchildren. His family was everything to him. He served as a role model and steadying influence, passing on his love of history and music.

During a long career as an international tax lawyer he worked for several major corporations before retiring from EDS in 1996. In his work he travelled around the globe often later with his wife Irene. Bud so relished the intricacies of tax law that following his retirement he pursued his interest in international tax law by serving as Chairman of the Institute for Research of the Economics of Taxation for several years.

Bud was unselfish with his time and despite a heavy travel schedule he served on several school boards and parish councils as well and did charity work establishing and supplying a hospital in Central America. He was a Knight of Malta.

A private burial took place at Gate of Heaven Cemetery in early April. A memorial Mass will be scheduled for a future date. Donations in his memory may be made to Thomas More Society or Tunnel to Towers Foundation.