Police Blotter: Big Fire, Mini Cooper; Didn’t Fall and Can Get Up; Needs Extra Care, Not Getting It & So Much More

MyRye.com
September 24, 2020
0
1198
Facebook
Twitter
Email
The police blotter is a highlight of recent activity from the City of Rye Police Department.

If you appreciate the hard work of our local police men and women, please consider supporting our RyeFIRST campaign to honor our first responders and help address food insecurity in Westchester County.

Starting Time. September 17. Old Post Road. City Code Violation. Caller reports construction in violation of the Rye City Code. No violations observed. Spoke with Foreman and advised of start time for construction equipment. Spoke to complainant and informed them the foreman was spoken to.

Trash Talk. September 17. Purdy Avenue. Illegal Dumping-Private. walk in complainant at police HQ. Local property manager wants to document an illegal dumping of paint thinner on his premise. Not looking to pursue criminal charges. Sworn statement provided and will return at a later point in time.

Absentee. September 17. North Street / Theodore Fremd Avenue. Road-All Other. caller states there are mail/postal boxes and envelopes all over the street on theodore fremd somewhere in the vicinity of the con edison yard or con edison corporate offices. Blue Recycling boxes left outside of #350 Theo Fremd blowing in the wind.

Imaginary Tree. September 17. Ellsworth Street / Milton Avenue. Tree Down. caller states city tree looks like it is about to come down. parked and looked in the area no tree observed.

Poison Overboard. September 17. Marine Unit Building / Milton Road. Environment Conservation Comp. Complaint of dumping. Complainant states he saw a party aboard vessel on D dock dump something from a bucket overboard. Party in slip 255 states he was rinsing a bucket and that he was having trouble with his bilge. Observed a slick on the water that had been investigated earlier in the day. TOT ENCON Officer Tompson for further investigation.

PD Dispatched, Then Animal Dispatched. September 18. Boston Post Road / Hornidge Road. Animal Complaints-Other Animal. Caller reports deer on the side of the road that appeared injured. Upon arrival, found deer with visible trauma and bleeding from the legs. Deer was not moving and exhibited labored breathing. Traffic was stopped in both directions on the Post RD. Animal dispatched. DPW notified for removal. Animal dispatch report prepared.

Road Rage. September 19. I-95 Northbound between Exit 18 and 19. Assist Other Police Department. NYSP need assistance with a combative party.

Smoky. September 19. Crescent Avenue / Morehead Drive. Neighborhood Trouble. Caller stated that five 13 year olds, all white males, started a fire in the woods. She stated that they are still on scene. FD dispatched.

Below Deck. September 20. Forest Avenue. Suspicious Person. caller states someone is hiding under her porch. 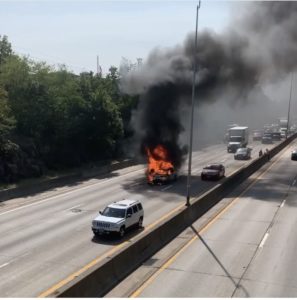 Rocky Road. September 21. Maple Avenue / North Street. Assist Citizen. Caller reports that two kids were throwing rocks at cars. One youth had a black sweatshirt and the other a neon green colored shirt. Both parties waking toward North St. Canvassed the area. Unable to locate.

Didn’t Fall and Can Get Up. September 21. Redfield Street. Assist Citizen. John from Alert 1 reports an activation at Mrs. _______’s home. Request to enter from the rear door. Not able to make contact with 91 year old female. Spoke with Mrs. Morrisy who stated she clicked the alert pendant by accident. No medical attention needed.

Dog & The Tan Subaru. September 21. Forest Avenue / Ridgeland Terrace. Suspicious Vehicle. Caller states that he had a very unusual interaction with a Tan Subaru in the above area. He reported that he was walking his dog and the Tan Subaru seemed to be following him. The caller stated that he would cross the street and the car would turn and continue to follow him. Caller describes the driver as an African American male. There was not interaction with the driver. Area canvassed. Unfounded.

Batty BMW. September 21. Cedar Place / Sylvan Place. Suspicious Vehicle. Party reports a white BMW that keeps pulling in and out of her driveway. Unknown parties in the car and one appears to have a bat. Party checks. Stopped to check directions.

Scrambled. September 21. Overlook Place. Assist Citizen. Caller reports that unknown parties threw eggs at his front door. Mr. ______ had eggs thrown at his house this evening. Does not know who could have done it, nor does he have any kids living in the home. Mr. Pollard wishes to just have the people responsible spoken too.

Angry Server. September 22. Rafele Rye / 26 Purchase Street. Assist Citizen. Caller reports a fired server threatening other employees. PO Kapus Disp. Caller did not want to pursue any charges. They were advised to call back if anything escalates.

Needs Extra Care, Not Getting It. CVS Store / Boston Post Road. Assist Citizen. caller relates that there are two children approx 3 and 7 yoa in a car with the windows closed and alarm sounding. car 10 sent. kids were inside vehicle, windows open waiting for mother inside cvs. spoke with mother inside cvs, relayed that it was unsafe to leave children inside car. she said she left them a phone in case they needed her but she would b more careful next time.