After 31 Years of Service to Rye, Firefighter Cucchiara Works His Last Shift

Monday was Rye firefighter Mike Cucchiara’s last shift after 31 years of service to the City of Rye, the last 27 with the fire department.

“The close knit organization where we depend on each other to provide a valuable service to the community,” says Cucchiara when asked what he will miss most about the Rye FD. “It’s kind of like a family – you are there for 24 hour shifts”.

“Mike Cucchiara began his career with the City of Rye FD in April of 1993 shortly after I was employed with the city in 1992. I have had the pleasure to work with Mike for his entire career,” said Lt. John McDwyer, who oversees the department.

“Mike has responded to many of Rye’s emergencies during his tenure with the city. Mike was also part of the emergency response to ground zero on September 11, 2001. He has always served the city with distinction and professionalism. We will miss him and wish him all the best in his retirement.“

Cucchiara grew up in Harrison  and “saw the Harrison FD around”. And his father-in-law John Wickham “had a big influence on my career” said Cucchiara. Wickham was a professional firefighter for the City of Rye serving for twenty years until he retired in 1999. After his retirement, Wickham served as a volunteer fire chief for many years.

To get in with the city, Cucchiara initially worked for the Rye boat basin for three and a half years. That’s when he was exposed to the Rye FD and the rest, they say, is history. He took the State fire test and waited for his opportunity. 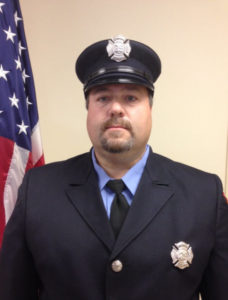 Most of his 27 years was spent in the Milton firehouse, where you will find Engine 192. The engine company (there is no ladder service at Milton – Rye FD HQ has Ladder 25) is the first to respond to the Milton Point area.  Until last year when staff was increased to two firefighters on duty, Cucchiara would be the lone on duty staff in that big firehouse.

His best memories include graduating from the fire academy in 1993 and seeing the recent improvements in the department. When asked what advice he would give to an aspiring firefighter, Cucchiara recommends pursuing a college education in fire science and points out one of the best fire science programs is at John Jay in New York City.

On 9-11 Cucchiara and others in the department responded in Engine 191 to Ground Zero (corner of Fulton street and Church Street) where they provided water supply to FDNY and assisted an FDNY Chief with various duties.

What’s next for Cucchiara, who lives in the Rye Neck area of Mamaroneck? He’ll be heading to Lake George for some well deserved relaxation with his wife Maureen and sons Brian and Kevin. But after that, there will be no rest for this firefighter.

He owns and runs Cucchiara Landscaping (914-967-0029) and serves Rye, Purchase, Larchmont and other communities in Southern Westchester. The company is certified organic (sure to make the Rye Sustainability group happy) and provides design, installation and maintenance services. We bet he knows how to water the grass too…

In an update to our earlier story, the identity of the 21 year old woman killed by a MTA Metro-North train early Wednesday evening...
Read more