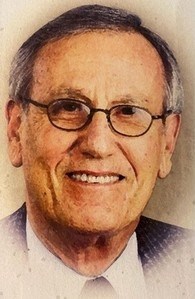 Richard Harris Kabat, 88, of Rhinebeck, New York, passed away on January 19, 2021. Richard, known as Dick, was born in Rye, New York to Reuben and Sara Kabat, and grew up in Ocean City, New Jersey.

Dick attended the University of Pennsylvania, Wharton School of Business, class of 1954, was a proud member of the Sphinx Senior Society and an ROTC cadet. The ROTC program would lead to the rank of Captain in the United States Air Force from 1954 to 1957. Following his military service, Dick returned to Ocean City to work in the family business, Kabat Men’s Shop. After his father’s passing in 1965, Dick, with his mother Sara, took over the business, his sister Judy ultimately joining them. Kabat Men’s Shop grew to be a cornerstone of downtown Ocean City.

In 1960, Dick met the love of his life, Shirley. After 6 weeks and 11 dates, the two were engaged and married in 1961. They spent most of their family life living in Margate and Linwood, NJ. Dick gave back to the community he loved. He was a President of the Ocean City Chamber of Commerce, Ocean City Retail Merchants, Ocean City Upper Township Rotary Club, and Friends of Stockton State College Performing Arts Center. Dick also served as a Board Member of Marine National Bank and on the Board of Trustees and Chairman of Shore Memorial Hospital. In partnership with his friend Mike Taht, Dick developed and built the Ocean City Community Center and was the inaugural Chairman of the Ocean City Community Center Commission.

Upon retirement, and living in Rhinebeck, New York, he loved to offer his advice and counsel to young business owners through the SCORE organization. A lifelong Eagles fan, Dick was thrilled to experience the 2017 Super Bowl win. Wearing his Eagles jacket and cap around town, he became known as the “Eagles man”.