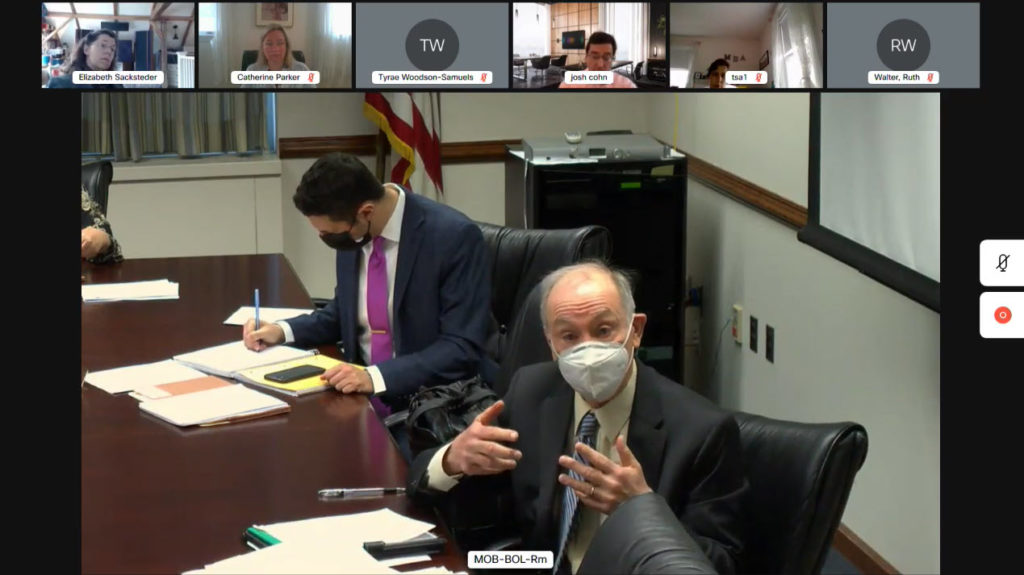 The sometimes heated exchange came at a joint meeting of the County Parks & Recreations, Budget and Contracts committees, and just before the Board of Legislators approved the Playland Standard Amusement deal Monday evening.

After Cohn made a laundry lists of asks on behalf of the City of Rye, Nonna said “We have negotiated this up to the hilt trying to protect everybody’s interests.”

“To come at the last minute and raise issues that should have been on the table maybe in 2016, 2017, 2018, 2019. I did send the agreement on March 12th and said please call me with any questions and that’s almost a month ago and no one called me,” said Nonna. “This is the first I am hearing of some of these issues you are raising.”

“Please go slow – kindly shade in the missing sections that the City of Rye needs. Hear more from the public and allow us to do the same,” said Cohn.

The action moving the contract to a full Board vote had already been completed a week prior to Cohn’s comments. As previously reported, the Westchester Board of Legislators approved the Standard Amusements contract Monday evening.

Local County Legislator and Rye resident Catherine Parker told MyRye.com the end result is a “terrible precedent” on the hands others but not Latimer, her or Cohn.

“I voted no. The process was rushed at the end, and therefore flawed;” Parker told MyRye.com. “As of our meeting on March 31st, it was clear by the answers I had received that day to questions I had asked related to Standard’s projection of $8,000,000 in revenue from Tiki Bar alone that we needed further discussion. Though I had expressly conveyed to committee members at the next meeting, April 7th, that Mayor Cohn had concerns and wished to address the committee, the proposed second amended agreement was voted out of committee AT THE END OF THAT MEETING.”

“Truly, a terrible precedent has been set, and is in complete contrast to the Good Neighbor Policy espoused by County Executive George Latimer,” continued Parker. “This failure to extend a courtesy of one meeting is on the three Chairs of the committees and Board of Legislators leadership. Not on the County Executive. Not on me. Certainly, not on the Mayor of Rye. I have no doubt that the agreement could have been made better by what we heard yesterday, April 12th from Mayor Cohn.”

As for Mayor Cohn, he still sounds hopeful while describing a “hasty end” to the process. “The County has been able to gain some ground since the 2016 agreement and the County Executive and Board of Legislators (including our Catherine Parker) are to be complimented for their efforts,” Cohn told MyRye.com. ”

“In terms of details particularly important to Rye, there is helpful language with respect to free access to boardwalk and pier, and protection for Edith Read and the Children’s Museum, but the Tiki Bar and Ice Casino might become Standard’s – to uncertain effect,” Cohn continued. “As before, issues like compensation for City services will need to be negotiated separately with, I hope, the County’s assistance. I also hope the County will help perpetuate the County Executive’s “good neighbor policy” with respect to planning and operations. While understanding that the Board felt the pressure of the ongoing bankruptcy proceeding, I echo Catherine Parker’s thoughts about the hasty end of the deliberative process.”

The emergency call came in at 1:36pm Thursday ... Ducklings were stuck in two different storm drains at 296 Purchase Street at the corner of...
Read more
Playland

Playland, now under the care of Standard Amusements, will open for the season on Thursday, June 9th. The new June 9th opening day replaces...
Read more