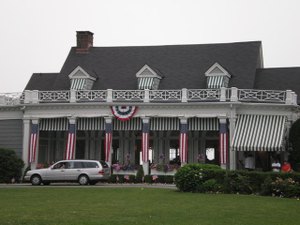 (PHOTO: Manursing Island Club, Rye) One of the great things about living in Rye during the summer is the easy access to the beach and pool facilities in town. All Rye City residents have the opportunity to belong to Rye Golf Club and Pool with access to an olympic size swimming pool, kiddie pool, dining facilities and an 18 hole golf course overlooking Long Island Sound. The club hosts a competitve children’s swim team program and family social events during the season. To learn more, visit www.ryegolfclub.com.

In addition, Rye is home to several private clubs:

Nearly all of the private clubs host a variety of day camp and swim team programs for children, tennis and paddle tennis instruction and competition, and social activites thoroughout the year.

*Sources, The History of Rye Clubs by Paul Hicks, club websites, and conversations with friends.