In a story this past week on the palatial homes Wall Street fat cats are enjoying while our over-leveraged economy goes bust and taxpayers are looking at a $700 Billion bailout, ABCNews.com published descriptions of Thain’s home in Rye that look strikingly like accounts previously published in MyRye.com. From the ABC account:

"For purely palatial, it may be hard to top Merrill Lynch CEO John Thain’s house in Rye, N.Y. Fourteen bedrooms? Check. Swimming pools? Check. Tennis Courts? Check. Lake stocked with fish? Check. The compound is reportedly so big that it spans two different towns, Harrison and Rye. It’s believed to be worth close to $10 million.

John Thain has been CEO of Merrill Lynch for less than a year. He received a $15 million cash bonus when he signed on with the struggling company. Just last weekend, Thain engineered the sale of the 94-year-old financial services firm to Bank of America. Thain stands to make an estimated $9 million off that deal." 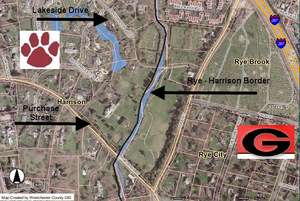 Besides our original Thain real estate coverage, we posted updates when we discovered his property enveloped three municipalities and when we found out his honey bees were dead.

Hey, ABC, how about a little attribution?