What did you think we were speaking about? Really… It is the season of love for the wild turkey, and this fella, spotted Sunday at the Marshlands Conservancy, is in full splendor for the ladies. Full splendor is – in part – determined by the full red, white and blue coloring on the male birds. One heck of a patriot we say. 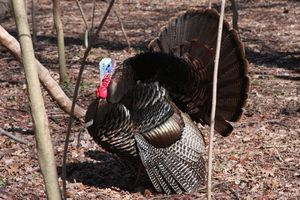 Benjamin Franklin, one of our founding fathers, preferred the turkey over the bald eagle as our national bird. According to Wikipedia, he wrote his daughter in 1786 and said in part:

"For my own part I wish the Bald Eagle had not been chosen the Representative of our Country. He is a Bird of bad moral character… For the Truth the Turkey is in Comparison a much more respectable Bird, and withal a true original Native of America… He is besides, though a little vain & silly, a Bird of Courage, and would not hesitate to attack a Grenadier of the British Guards who should presume to invade his Farm Yard with a red Coat on."