In a letter, Rye resident Nicolette Flosse explains to MyRye.com readers that Rye Town Park's Oakland Beach needs real protection. What do you think? Post a comment below.

I remember our real estate agent pushing the beach as a selling point stating that only the residents of Rye had "beach rites". And so we decided along with other factors that the quality of Rye was what we were looking for. In the three years that we have been here, I have been to complain to the town parks office on numerous occasions regarding the garbage on the beach. Each time I am told that they clean the beach every morning and that the machine cannot pick up cigarette butts or all of the trash that is left behind. 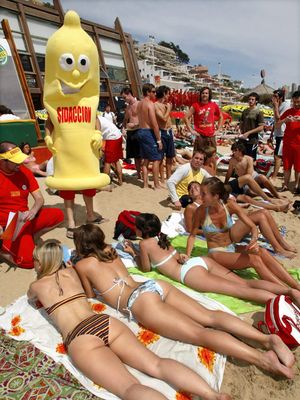 (PHOTO: We already have Mr. Floatie, we don't want guys like you) If the visitors to the beach cannot throw away their cigarettes, then why should they be permitted to smoke on the beach. On a hot day, there is nothing worse than trying to keep my family away from the secondhand smoke in trying find a spot on the beach away from the cigar and cigarette smokers. There is always the overwhelming concern about dogs on the beach, in the park, etc. and I have yet to come across any dog remains that were threatening the health and safety of my children. Yet, after an hour and fifteen minutes at Oakland Beach, I had to deter my son from playing with cigarette butts, empty beer cans and broken beer bottles.

The final outrage, being the cause for this complaint, was when my four year old daughter excitedly ran over to our towel saying that she found a balloon and was going to blow it up.  In complete shock, myself and the other mothers in our play-date panicked as we scrambled to keep the condom away from her mouth.

With the taxes we pay as a Rye resident, I should not be forced to concede to the filth our beach and pay thousands, upon thousands of dollars to join one of the many clubs in our area to keep my children safe at the beach.  It's time to ban together to strengthen the laws regarding smoking and debris on our beach.