D-Rod Steps Up to the Plate for Rye Dems

Rod Brown is the new clean up hitter for the Rye Democrats. 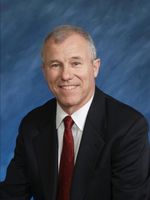 Heading into the election season, Rye Democrats, who recently announced their fall slate, have elected a new leader as party chair, Rod Brown. MyRye,.com is dubbing Brown "D-Rod". A-Rod is already in the house.

Here is the press release. What do you think of D-Rod and his batting line-up for the fall? Leave a comment below.

Mr. Brown is the president of the New York City law firm Brown & Whalen, P.C. The firm specializes in commercial litigation with a concentration in trademark, trade diversion, and counterfeiting.  Mr. Brown was formerly an assistant district attorney in N.Y. County.

He received a B.A. from Williams College, an M.A. in philosophy from the University of Heidelberg, and a law degree from Cornell University.

Mr. Brown has previously served as a Rye City Democratic District Leader, and has participated in campaign fund-raising for various candidates for public office.

Married with two children, Mr. Brown lives on Park Avenue.  He has participated as an assistant coach in the Rye youth soccer program.  Rod and his wife, Marcy, have supported various local not-for-profit activities in the areas of pre-school education, library and environmental causes.

Mr. Brown hopes to continue to contribute to the tradition of the RCDC of promoting quality candidates for local offices who have made and will continue to make substantial contributions to the community."