At $300K, Rye Families Have Hit the Skids – Washington Post

According to the Washington Post, you have hit the skids. If you are one of the unfortunate in Rye making only $300,000 a year, The Washington Post has profiled you in a piece they ran Sunday entitled “Squeaking by on $300,000”. 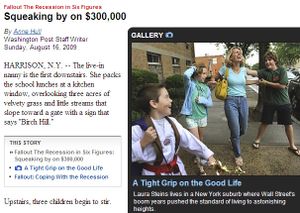 The article makes Rye residents looks like a bunch of rich cry babies and has generated over 900 reader comments on the Washington Post web site.

The "Rye in crisis" view was provided by profiling someone who lives in Harrison. The article profiles Laura Steins, a Harrison Huskie, divorcée, mother of three and someone who seems devoid of any self-awareness who seems to spend most of her time in Rye:

"…The sandwiches at Patisserie Salzburg are still wrapped in wax paper and tied in pink ribbon. The pool at the Apawamis Club is open for the season. At Fong's Hand Laundry, the pressed shirts are still folded into brown paper and knotted with twine.

The decline is found in the fine print.

On the bulletin board at the YMCA in Rye, for example, where nannies and maids who've been let go look for new employment.

On the wait list at the $7,000-a-year nursery school at Rye Presbyterian Church, where only 30 names hover instead of the usual 300.

On the sleepy crime blotter of the Rye Police Department, which shows an increase in neighbor and domestic tensions.

"You have a guy who was at the top of his game on Wall Street," explains Police Commissioner William Connors. "For the first time, he gets up in the morning and he has no place to go." He hears a neighbor using a loud leaf blower at 7 in the morning and calls the police to complain.

When Wall Street crashed, so did this community. A 44-minute train ride separates the financial kingdom from this emerald suburb; the ties are so close that most people here cite the collapse of Bear Stearns in March 2008 as the start of the recession, not long unemployment lines or GM's bailout. More than a year later, as the economy shows signs of recovery, the damage is still evident. The herds of beige trench coats on the train platforms in Harrison and Rye remain thin and culled. The billions of dollars lost in investments are still gone.

Yet for all of the lives shaken, few are willing to talk about it. More than three-dozen people interviewed for this article would not allow their names or identifying details to be used.

Laura Steins doesn't mind saying that she is barely squeaking by on $300,000 a year. She lives in a place where the boom years of Wall Street pushed the standard of living to astonishing heights. Where fifth-graders shop at a store called Lester's that sells $114 tween-size True Religion jeans. Where a cup of fresh spinach and carrot juice called the Iron Maiden costs $7.95.

By local standards, Steins occupies the lower rung of affluence — the rung where every dollar now matters."

Steins' nanny, who is also interviewed, reports working for a few Rye area families: "They belonged to the Manursing Island Club and Coveleigh Club and the American Yacht Club. Steins merely belongs to the Shenorock Shore Club, and without a cabana."

No cabana, what's the world coming too? Really, this is the focus? Really?

And for the record, I have never eaten a sandwich with a pink ribbon.