Today we begin to introduce you to candidates for city council, starting with Peter Jovanovich.

Position You’d Like To Have: Running for City Councilman 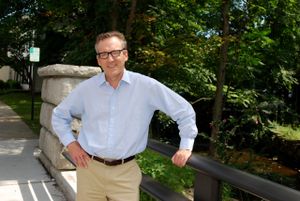 President of the Alfred Harcourt Foundation, based here in Rye. We give college scholarships to students from very disadvantaged backgrounds attending The City University of New York and The College of New Jersey. As president, I provide one-on-one counseling to each of our over 100 current Harcourt scholars. The foundation’s endowment is approximately $11 million. I was formerly chairman of Pearson Education, the world’s largest educational publisher.

Republican. In my view, the greatest issue facing government in New York, at the state, county, and city levels, is the need for fiscal discipline.

Rye’s city government is mired in small controversies while major issues – taxes, spending, road repair – remain unaddressed. A change in the leadership in the Council is needed, and it’s my hope to provide some of the necessary focus to help reform City government.

It’s great that the citizens of Rye are getting a real choice on Election Day: two full slates of candidates offering differing approaches to managing the City. I’m running with Doug French for mayor, and Suzanna Keith and Richard Filippi for City Council.

1. Taxes. The City is becoming unaffordable for many residents because of the rise in property taxes. In the last seven years, the City has increased taxes 50%. Last year’s 4.5% tax increase, during the worst recession in 75 years, was ill-considered.

2. Growth in spending. With a 78% increase in government spending over the last seven years, Rye’s surplus reserves will be exhausted by the end of this year. We need to introduce new budget discipline, new kinds of labor agreements that allow greater flexibility to control costs, and new priorities for capital spending. We should cancel plans for a new police station (estimated to cost over $20 million) and concentrate capital spending on roads and bridges, pedestrian safety, and flood mitigation.

3. City Council performance. Rye residents have watched the Council waste hundreds of hours on various subjects without reaching a resolution. We have seen the last two City Managers come and go, so that there is no continuity in managing city affairs. Residents want a Council that listens to the public, makes the necessary decision, and then moves on to the next priority.

Rye is not prepared for the next 100-year flood.

2. Widen and deepen the ponds above the dam; combination of State, County and City funds. A bond issue may be required.

This is not a City Council responsibility. The newly elected Board of Education of the Rye City School District is handling this issue.

Grade Rye’s handling of the following issues over the last two years on an A, B, C, D or F scale.

The City staff has worked very hard to get results; unfortunately, the State and FEMA have been slow to give approvals. Going back decades, the City has failed to take necessary steps to mitigate flooding.

The City has made little progress in getting its fiscal house in order. It waited too long to react to recession, and should not have raised taxes 4.5%. Labor costs (salaries up 6%, benefits over 10% last year), are rising faster than can be sustained.

Public works including condition of sidewalks and roads and snow, leaf, garbage and recycling removal – D/B+

Anyone driving, biking or walking around Rye can see our roads and sidewalks are in poor condition. Snow removal in downtown lots could be improved. On the other hand, the City does a good job on recycling.

Our Fire Department does an excellent job, but the City has been slow to act on pedestrian safety. According to Mike Genito, former City Comptroller, it took a child being hit on Boston Post Road to put in a crosswalk.

Public recreation including parks and recreational programs – A

1037 Boston Post Road  A multi-million dollar mistake. The City bought the building in 2006 for $6.2 million as a site for a new police station. But, because of the floods of 2007, it’s unusable as a police station. The value of the building has fallen by at least 30% (according to local realtors’ estimates). With a $5 million balloon payment due next May, City should sell the building and get it back on the tax rolls.

1. Service as Treasurer of the Friends of Rye Nature Center. So many people in Rye contribute to sustaining this 47-acre jewel of untouched land in the center of Rye, even during these difficult times. As a member of the Board, I’m working on long-term plans that will keep the Nature Center and its programs thriving.

2. Service on Rye’s Board of Architectural Review. Along with my fellow board members, I have worked to prevent some of the more egregious examples of bad architecture from diminishing the charm of our neighborhoods and downtown.

3. Investigative reporting for The Rye Record on issues like the illegal dumping at Beaver Swamp Brook, which has caused greater flooding, excessive overtime expenses in City government, and the operating losses at Whitby Castle.

3. The community spirit in Rye in which so many volunteer to make Rye a better place to live.

In good weather, playing tennis or riding my bike, and in bad, working out at the Y. And always, taking our dog for a walk.

After 17 years in Rye, we prefer to drive to Sunrise Pizza for takeout. Favorite pizza: half-white/ half-tomato. Also, ice cream at either Piazza Pizzeria or Longford’s.

Café Livorno, in great part because of the service and Daniel, the consummate waiter. Rigatoni al Sugo is the entrée we all enjoy. Café Livorno, 92 Purchase Street, 967-1909.

We live at 647 Milton Road, across from the wonderful marina and right behind Milton School. In our 17 years here, we have also lived on the corner of Hillside Road and Grandview Avenue, and on Locust Avenue.

Working with my wife Robin, who’s been the editor of The Rye Record since 2000, we have contributed to probably every Rye non-profit, either with money or time, including The Rye Historical Society, the Rye Youth Council, Rye High School (though the Rye House Tours), The Rye Free Reading Room (particularly the annual library book sale), the Carver Center, Friends of Rye Town Park, Helping Hands, Rye YMCA, The Rye Arts Center, as well as Friends of Rye Nature Center, Edith Read Wildlife Sanctuary. We held the first fund-raiser for the Save the Bird Homestead.

For me personally, the most rewarding community activity has been writing profiles of people for the paper. It’s a delight to spread the word about individuals who lead life to the fullest and contribute so much to our community. And when a longtime member of the community dies, talking to family members about what made someone loveable and admirable, and publishing their recollections, is reward in itself.

Your web site: http://changeforrye.com
Your phone: 967-3456
Your email address: Pjovanovich@aol.com