Today MyRye.com is carrying a guest column from former Rye City Councilman Matt Fahey on his choices on November 3rd:

Why I’m Voting for Change by Matt Fahey

I am enthusiastically voting for the Change for Rye team, because I believe the time has come for new leadership, which will bring with it a renewed sense of purpose, a fresh approach, and a higher energy level.

A Renewed Sense of Purpose 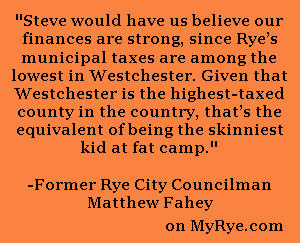 The “Change for Rye” team of French, Filippi, Jovanovich and Keith will re-focus council attention on city business. Their plan to institute long-term financial planning, continuous budgeting and more frequent performance reviews will highlight what’s necessary to contain our debt and taxes. It will frame the debate on what we must do vs. what we’d like to do. They won’t be afraid to act decisively.

The current City Council is failing to address major challenges. This lack of direction is having a very real – and costly – impact on our tax rates and our financial well-being. Steve would have us believe our finances are strong, since Rye’s municipal taxes are among the lowest in Westchester. Given that Westchester is the highest-taxed county in the country, that’s the equivalent of being the skinniest kid at fat camp.

Furthermore, Steve and his team have repeatedly stated that nothing can be done to improve affordability in Rye. For this reason alone, they don’t deserve to be on the council. It is simply unacceptable that our current elected representatives are giving up on their core duty.

Steve claims that he is the only one capable of running the city. To paraphrase Calvin Coolidge, “When a mayor feels that he is the only one who can lead the city, he is guilty of treason to the spirit of democracy”. The great strength of our form of government is that no man is irreplaceable, no one elected official inviolate. Newly elected officials create new opportunities and find new solutions to old problems.

One such solution proposed by the Change for Rye team is to separate the “open microphone” sessions from the full council meetings. The “open microphone” sessions have several drawbacks that have alienated Rye residents from their elected officials. First, it takes away valuable time from official city business. Secondly, it requires that anyone looking for guidance or help from the city council to appear on city-wide TV, no matter how small or trivial their request. Thirdly, it attracts publicity-seeking stunts designed to politicize personal issues and win public support.

Holding an “Open Forum” night, with only one or two council members and the city manager in attendance to work constructively with residents to resolve their issues is a great idea, just one of many the “Change for Rye” team has.

Lastly, even the most casual observer must have noted the difference in energy and enthusiasm between the two parties. Just about any Saturday or Sunday, Doug, Peter, Suzanna and Richard are walking through the downtown business district, listening to the problems of Rye’s residents and asking for their support. They’re also at the train station on a regular basis, handing out leaflets, and knocking on doors at night. They have been listening to the public’s concerns for months.

By contrast, I have yet to see the mayor and his team campaigning in public – aside from some cheesy aerial advertising at the Rye-Harrison football game. In fact, the Mayor and his team didn’t even bother showing up to a recent debate on environmental issues, hosted by the Environmental Advocacy Group of Rye. I have to wonder… do they even want to win? I’m voting for the team that has the desire to win, has some new ideas and are committed to improving Rye. I’m voting for Change!